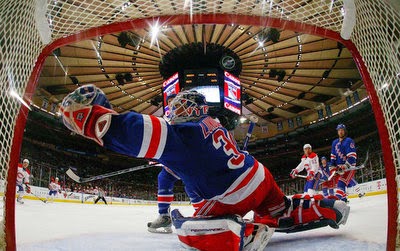 I'm not a hockey fan at all. I think if you've been coming to this litle blog called Dome Pondering for awhile, you are well aware of this fact. It's not out of sheer dislike for the sport, nor do I find it boring, but because well, it's just something I never was into.

Personally, I played a little street hockey a bit back in the day when roller blades were the in-thing, but for the most part, playing stickball, baseball, basketball, and football in the streets and parks here in Brooklyn were what I did. Naturally, those are the sports that I am naturally drawn to.

And to be honest, I just don't understand hockey completely. I don't. Everything seems random, by chance, or by happenstance. I've never had someone actually explain the game to me. Too often, the hockey fans I do know are so busy trying to tell everyone how "great hockey is" or merely complaining about "why hockey is better than the NBA". To be honest, I'm not sure they quite understand the game either.


I'm really that fan that tunes into hockey come the Winter Olympics, and tune out until the next one.

I just watched a hockey game at a bar in Tennessee while listening to live country music. And I enjoyed it all. Wow. Who am I?
— Dome Pondering (@DomePondering) April 25, 2014

However, on my recent trip to Nashville, I went with two colleagues of mine who were die hard hockey fans, and also spent time with another professional colleague from Dallas, Texas, who also loved the sport. In my hanging out with them, I managed to watch more hockey games in three days than I probably ever have - ever. And yes, I enjoyed it. Even watching Game 7 of the New York Rangers vs. Philadelphia Flyers this past week on my couch.

In watching these games, here are some things I learned:

All in all, after my binge hockey watching, I'll probably pay more attention to the sport. It's still below baseball, basketball, soccer, football, and tennis on my list, but it's now on the radar. It's now a legit watchable option.

Now golf, there is a sport I don't think I'll ever be able to get through an entire event unless I'm there live.