And then there were two. After a tournament that began with thirty-two random people, celebrities, sports figures, and even some fictional beings, the 2014 Clash now has it's championship showdown. A very unlikely one (aren't they all?), this year's clash should be interesting with a best of seven format within the reasons of the following format: (1) Least Likely to Sell Out; (2) Better Twitter follow; (3) Better investment for a ten year contract; (4) Better halftime performance at the Super Bowl; (5) Most likely to have a famous re-tweeted selfie; (6) Better wrestling promo; and finally, should we have a deciding criteria, (7) Most clutch performer. With that said, let's wrap this thing up and get our 2014 DP Clash champion.

As always, here is the road to this year's finals: 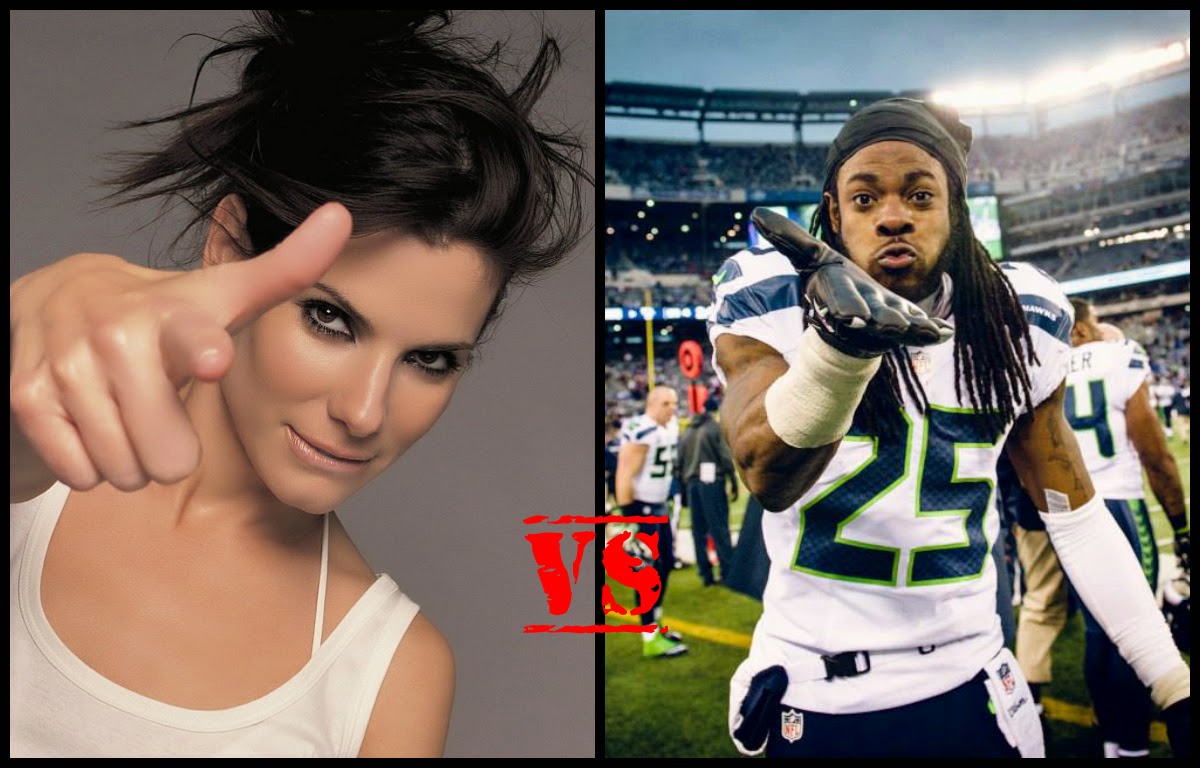 Least Likely to Sell Out - And here we go! This is a tough one to kick off this Clash series. Both seem like very genuine people - what you see is what you get. With little belief to truly see one changing who they are, this is where it gets difficult to decide. However, in the world of sports, especially football, money and long-term investment rules it all. If Sherman received a better deal somewhere else, he would most likely be inclined to leave for the cash. Bullock, really is her own product, and at this point in her career, has the freedom to take roles based upon the cash, or simply for the art of it. (Bullock Wins 1-0)

Better Twitter Follower - This one seems easy. There really isn't an official "Sandra Bullock" Twitter account. And even if there was, it would pale in comparison to the entertainment and interest that is Sherman's. (Tied 1-1)

Better Investment for a Ten Year Contract - There was brief mention of this in the first criteria and you probably already know the answer. Bullock's legacy and acting credentials are set for a long time to come. Barring anything drastic or unfortunate, she'll be well inclined to continue accepting roles over the next ten years. Sherman, a football player, doesn't have the insurance luxury. Football players average a career of three years, and that includes injury and/or decline in ability. (Bullock 2-1)

Better Halftime Performance at Super Bowl - Tricky, tricky. When you consider the talents that both bring, this is very interesting. A Sandra Bullock halftime show would probably be a bust. And obvious Sherman would be too. But let's take this angle - Sherman quite possible could put together a first-half of a Super Bowl so remarkable, it would be interesting to look back on during halftime of the "Big Game". Yeah, we're going with that. (Tied 2-2)

Most Likely to Have Most Famous Re-Tweeted Photo - This is another weird and interesting twist. As popular as Sherman is on Twitter, Bullock was present at the Oscar's where the most re-tweeted photo ever - EVER - occurred. Just a mere seats away from being a part of this. And if Bullock did ever get Twitter, her followers would dwarf that of the niche fan base of Sherman's. (Bullock 3-2)

Better Wrestling Promo  - We're going to a 7th and deciding criteria. Not even close. After that famous interview following the NFC Championship game from Sherman, it's pretty difficult to think he won't be able to do this much better than Bullock. (Tied 3-3)

Most Clutch Performer - Well, of course this year's clash comes down to this. Who is more clutch? Sherman has had his moments, especially the famous batted away ball in the NFC Championship game to send his Seahawks to the Super Bowl, and eventually, onto a championship. However, is he consistently clutch? And that's hard to do.  Bullock is. And that involves being clutch, with stellar performance after stellar performance. Her work in "The Blindside" was clutch. She came up big. The recent film, "Gravity", a film where she is basically acting and filming in front of CGI green screens, that's clutch. Tough way to break it, but Bullock takes this criteria clash, this championship clash, and overall, the 2014 DP All-Star Clash championship. (Bullock Wins 4-3)