We're down to four! As per tradition, this round is a best-of-seven with the following criteria: (1) Better Lead Singer/Frontman; (2) Longer Potential for Stardom Longevity; (3) Better Dresser; (4) Most Likely to grace Magazine Cover (5) More Likely to Headline Wrestlemania; (6) Least likely to end up in tabloids, and finally; (7) Least Likely to let down their fans. With that said, let's see who wins their bracket and advances to the Final Four.

For your review, here is the updated bracket: 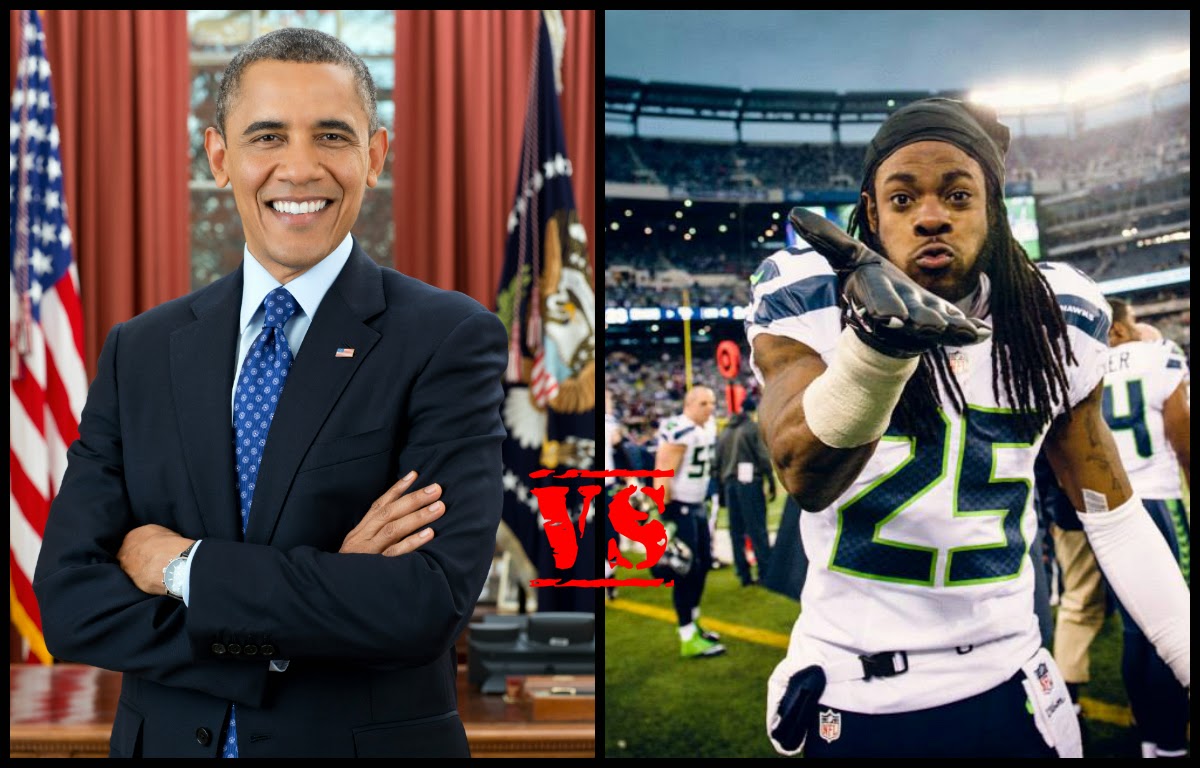 Better Lead Singer/Frontman - It's rather hard to picture President Obama being a lead singer for a group or band. Let's be honest, it's weird seeing him in any attire outside of a suit. There is not much of an edge The President would have that would lend to the appeal any lead singer needs to have. On the other hand, Sherman has that "it" factor as we've seen in the past. He's a loud-mouthed, fiery, and charismatic person, and that typically lends itself to what a lead singer should embody. Also, the dreadlocks also give him a distinct look which of course is a nice touch. (Sherman 1-0)

Longer Potential for Stardom Longevity - As great of a cornerback as Sherman is, once you are President of the United States, you are set for life. No stardom longevity than that at all. (Tied 1-1)

Better Dresser - This is an interesting one. While President Obama has suit provided for him which are elegant and custom made, because of his position, his fashion is rather bland and boring. Very little creativity or risks are taken. Sherman on the other hand, is not a bad dresser, and a times, pulls off some key looks. (Sherman 2-1)

Most Likely to Grace Magazine Cover - This one is rather easy. The leader of the free world, or Sherman, who recently became a household name beyond die-hard sports fans recognition. (Tied 2-2)

More Likely to Headline Wrestlemania - Always a favorite criteria of mine. I don't believe a President would ever waste valuable presidency time catering to pro wrestling. However, a guy with the entertaining capability of Richard Sherman would be more likely to enter the realm of pro wrestling, especially after his wrestling-like promo following the NFC title game. (Sherman 3-2)

Least Likely to End Up in Tabloids - Tabloids usually do not go for flavor of the times, which Sherman was following the NFL title game and Super Bowl. However, when you are the President, there will be all sorts of rumors that will make front page news - whether they are true or not. Simply take a look at the tabloid papers when checking out of your local grocery store. We've got a shocker here, folks. (Sherman wins 4-2) 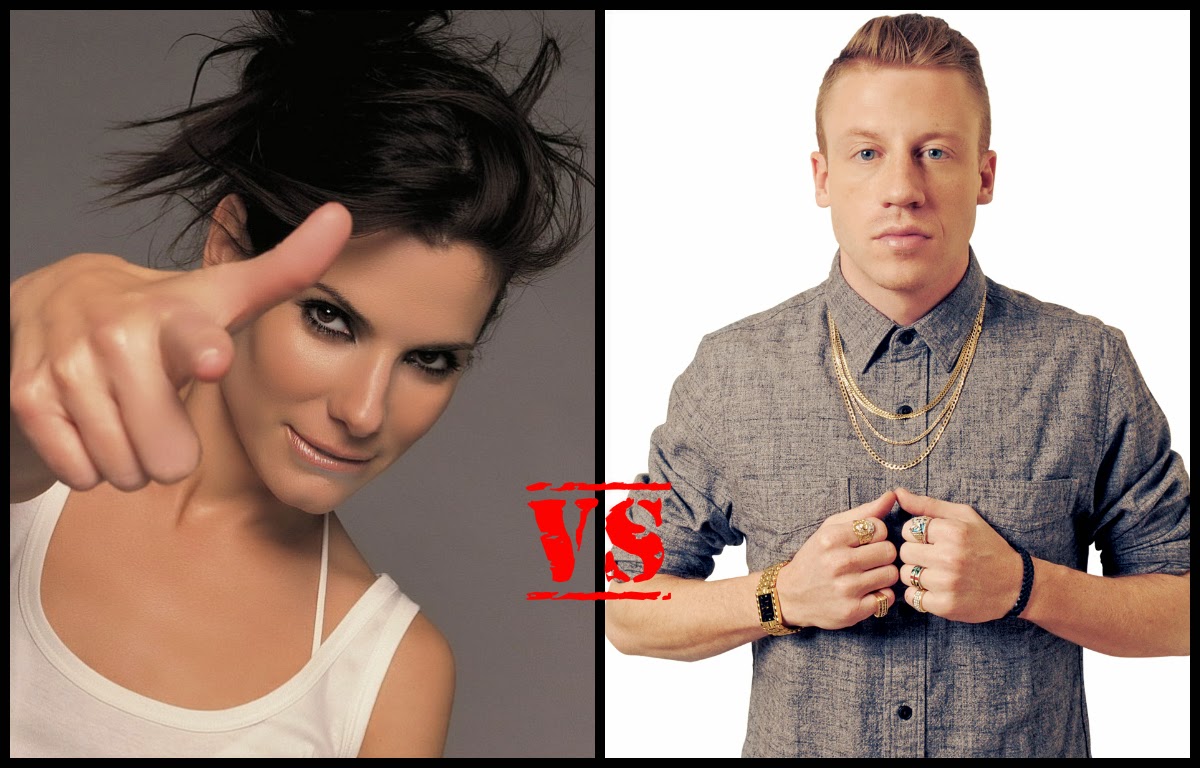 
Better Lead Singer/Frontman - Well this isn't fair, huh? As much I could try to make a case for Bullock, it just won't work. Mackleore already does this, doesn't he, Ryan Lewis? (Macklemore 1-0)

Longer Potential for Stardom Longevity - Hmmm, as easy as the first one was, is as easy as this is one is going to be. Macklemore, dude, your only in year one of your super stardom. Bullock has been around for quite sometime now and pretty much has her legacy as an actor intact. (Tied 1-1).

Better Dresser - Both are pretty fashionable individuals. However, Bullock is known more for her appearance due to various awards shows, and multiple blogs dedicated to well, what she wears. Macklemore for the most part, is currently in trend with today's fashion. (Bullock 2-1)

Most Likely to Grace Magazine Cover - This is a close one. While Macklemore fits the bill with his sudden rise to fame to pull a few magazine covers, it's still Bullock who is the one in demand to do so. Especially, among the women magazines...and well, some male ones as well. (Bullock 3-1)

More Likely to Headline Wrestlemania - Okay, okay. Macklemore will not go down easily here in the Final Four as he fits the bill to be the kin of guy to be a part of the grand event that is Wrestlemania. Macklemore is the perfect type of artist who usually performs at the event, while Bullock, well, she just doesn't really fit the pro wrestling scene. (Bullock 3-2)

Least Likely to End Up in Tabloids - And here comes Macklemore, huh? With longevity - opposite of the above criteria win - comes tabloid coverage and rumors. And to be honest, after parts of her private life went public a few years ago, shes been tabloid fodder ever since. (Tied 3-3)

Least Likely Let Fans Down - As this series has gone, it comes down to longevity and consistency. With Bullock, her work is consistent, and pretty much is well expected. Not much she can do to let her fans down, especially as of late. With Macklemore, he's still living off of his first album and the pressure to produce is still there. Bullock is moving on in a finals showdown with Richard Sherman. (Bullock Wins 4-3)

Well, who would of thought? Sandra Bullock versus Richard Sherman in this year's finals.