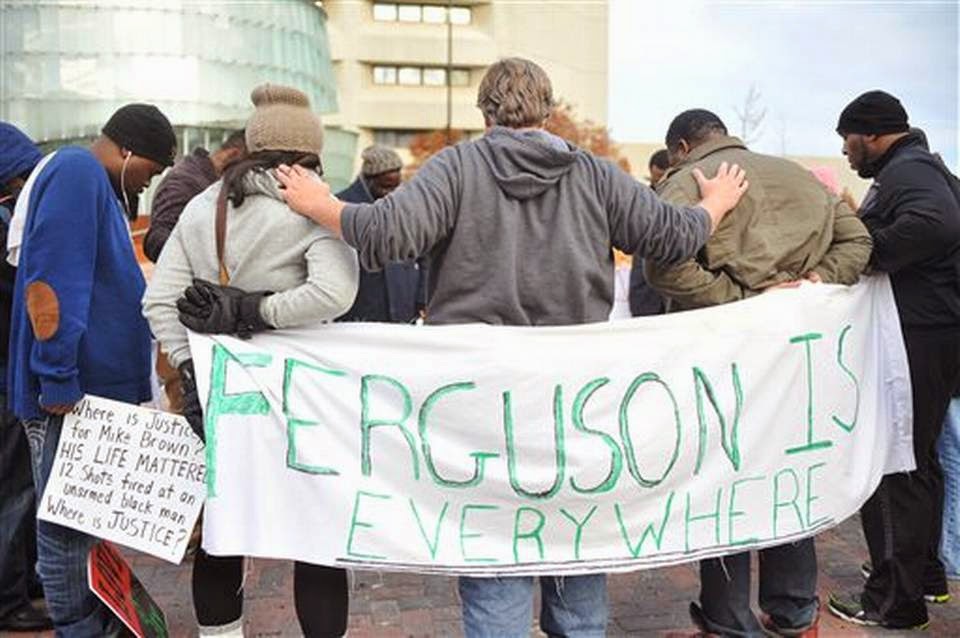 I'm not even sure what to say to be honest. I'll apologize immediately as I begin this post as I am not sure where it will end up, because, there really is a lot to digest in what happened this week - Monday night, and every night since then - in Ferguson, Missouri, and now here in New York City, as well as across the country. Unfortunately, we all expected this verdict of no indictment.

It's obviously a hot topic of discussion, and I truly don't want to add to the number of random thoughts and voices being thrown out there at the moment. Yes, everyone has a voice, and as of right now, everyone has a viewpoint and opinion, mostly spurred by emotion, but there are lots of people saying many things, from many different viewpoints, which simply add to the chaos.

I get asked time and time again from some of my students, student-staff, and interns, "Where do you come down on the Ferguson decision?" And while it seems there is an answer as black and white as the issue it has come to be presented as (pun intended), I still can't find it in my heart, truly in my heart, to answer without having a followup statement...or rather, a speech of some sort. This situation is so deep, so chucked-full of issues, injustices, and lack of involvement that it really spiraled into the perfect storm of a mess to get what we have today.


Like many, there are so many feelings, issues, and thoughts that evoke from this situation that it is impossible to boil it down to one. And if you do, I believe you are doing the situation, and the opportunity to grow from it, a mere injustice.

So in short answer, yes, I do find it very hard to justify Michael Brown being shot and killed unarmed. And yes, I do believe there is an issue with this situation, more so the devaluing of black lives in America and the broken legal system that allows it...or merely doesn't punish for it. And yes, I do (sadly) believe if Michael Brown were a much lighter shade of melanin, he would have never been asked to vacate walking the street to start this whole ordeal. Again, just my thoughts and how I truly feel.

But - yup, here comes the follow up - there are many other factors that truly - really - are underlying tones in this situation. Some which have become even clearer since my initial post on this situation back in August (So Sad, So Damn Sad: Quick Thoughts on Mike Brown/Ferguson Situation).

Random Voices - As the week progresses, the numerous accounts of "civil leaders" and "voices" that should be representing the black community and for other social issues are nothing more than public relations monsters. Where are the leaders? The real ones. Not the Jesse Jacksons and All Sharptons of the world who appear after the situation has occurred to reap the promotion from it. Most of them spur the rage that continue the divide and problems at hand.

When there is multiple (and empty) voices in the matter to make change, all we end up getting are more of the same from these supposed leaders who simply do PC issues for camera time. These are the times where one voice should be heard for protesters (and even to help prevent looting..and by the way, looters, you guys are all morons). I've lost so much respect (the little that I had remaining) for these "leaders".

Ignorance - Ah yes, one of the most powerful things in the world. Regardless of where you come down on this issue, what drives me insane is the audacity of some who point fingers, especially at the black community (more on that in a bit) to make their point on these issues and everyday living. The truth is - and this is the hard truth - if you don't wear black skin, you'll never know what it is like to be dark-skinned and living in this country. Ever. My closest friends who are white, nor my wife, no not even her, who embraces tans to balance out our pictures, will ever know. Because the truth is, being of color in this nation is still an uphill climb. Day in and day out.

Some are currently equating the story of Dillon Taylor who was recently killed by a black police officer in Salt Lake City, Utah. Taylor's story is just as awful as lives matter, no matter what race, yet, what is lost here is not black/white vs. white/black, it's a broken system - the broken system - which in Brown's case has been broken for too long. And of course, how we all still view others who are different than us.

Black Community Improvement - The black community has been using these situations for far too long to be their rallying cry for change and improvement. I've been saying it for years, let's do better. We have to do better. Go to school. Better yourself. Stop killing one another. Take responsibility for your neighborhoods and communities and overall future. Waiting on these unfortunate situations to play the "woe is me card" only gets the black community so far. Change, the type of change needed, starts here, and not solely on the government.

In This Together - And of course, there is the idea that this is just a black/white issue as if we live in the 1960's and have not progressed. It's easy to say "no we haven't" in jest, but the truth is, we have. Just look at the faces in the Supreme Court, the Oval Office, and other positions nationwide. However, if we kid ourselves into thinking this is a black-white issue, then we are dead wrong. This is about us.  All of us. This is about our nation, and how we will improve it so we don't go through this anymore.

What a mess. An absolute mess. All of it reflective of us - America. #Ferguson #FergusonDecision
— Dome Pondering (@DomePondering) November 25, 2014

Without going into a novel, the way we all can with thoughts and emotion right about now, those are just a few of the issues. And that is without delving into the broken system that is in place. After all, you simply have to read the transcripts to see the holes and awkwardness of the prosecution before the grand jury. How in the world did anyone expect the prosecution to be fair and impartial in this trial?

Regardless, it is a trying time in America. One I think we can overcome. Once we all move on from taking sides as if this were a political affair, or an attempt for revenge, or to spew hatred, and rather begin trying to invoke change for our future, only then will things change.

If there is one thing I truly, 100%, can get behind on, it's that this situation is a mere symptom of the true problems at the core. And that's the only thing I can say with surety right now.