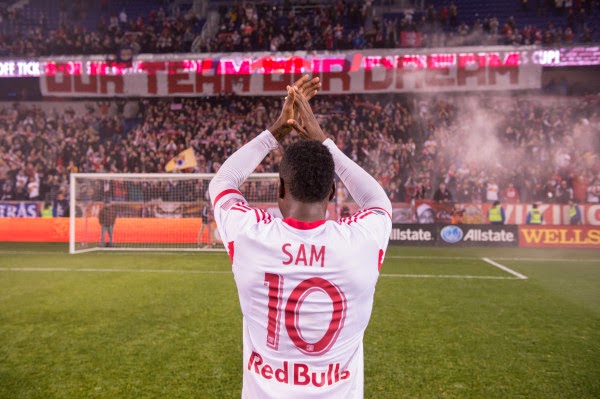 There is always that old saying, "if a tree falls in the forest, and no one is around to hear it, does it make a sound?" Well how about, if a team is on a championship run, and not many pay attention to it, does it really happen?

Regardless of your philosophical outlook on this theory, one has to beg the age old question when it comes to the New York Red Bulls. After holding on this past Saturday against rival DC United down at RFK Stadium (What a dump of a place...), the Red Bulls are now in the Eastern Conference Finals and now await a showdown with the New England Revolution. Of course, New York-New England...sports have a lovely way of working themselves out, huh?

With the New York sports scene about as decrepit as it's ever been, and it's pretty bad, especially considering we have two teams in just about every major sport, the Red Bulls are the only team that is providing hope and intrigue. And oh yeah, doing a little thing called winning. You know, no big deal.


Yet, because it's soccer, and some still consider the MLS a niche fanbase (and doing so very ignorantly), the pomp and circumstance just isn't there for this squad. Because, while the Red Bulls are slowly attempting to make their way to an MLS Cup as a Wild Card team, there are the swirling negative (and very attractive) stories of the Giants, Jets, Knicks, Nets, Rangers, Devils, Islanders, Mets, and Yankees. And oh yeah, some guy named Alex Rodriguez who is always - always! - leading news.

Yet, in a season where Thierry Henry has made it known he will head back to England after his contract expires at the end of this season, and the beginning of NYCFC in 2015 to split the soccer fanbase in the market - a New York City tradition - the Red Bulls are marching on with an underdog team and exciting play lead by MLS goal scoring leader, Brandon Wright-Phillips and band of scrappy footballers.

I've said it before, and I'll say it again - the best team in New York, right now, as of this writing, hands down, no debate - The New York Red Bulls.

Forget the stories, the controversy, and yes, even the soccer ignorance. When you get passed the fluff and empty sports talk, whether they win or lose this upcoming series, the Red Bulls are the only winner in town. For wins are the only thing that makes any sort of real noise, whether you want to deny it or not.

The New York Red Bulls...who would have ever thought? And my, how things have changed in this city.