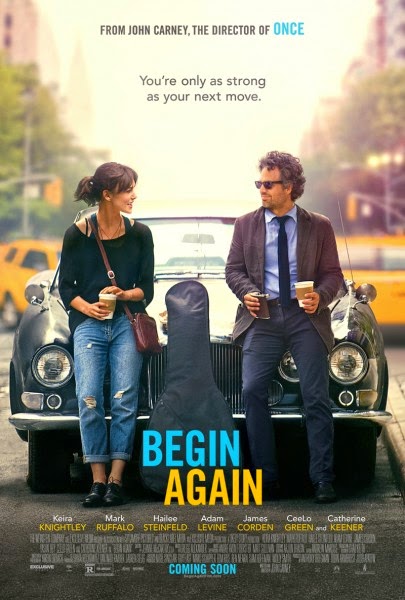 A down on his luck music producer and a young song writer, each carrying their own problems meet and eventually produce an album together which also jump starts their lives.

Greta shows up at Dave's concert to listen to the song she wrote being performed by him. After staring at him performing and the crowd's response to the song which was changed to a pop version, she shed's a tear, then leaves.

"I just think you have let your troubles get in the way of your entire life."

Begin Again from the poster seemed like a film yours truly would enjoy, and rest assure, it very much does. The film encompasses your basic coming-of-age story intertwined with turning around your life after a huge rut (hence the title, Begin Again), and nails it in a very funny and genuine piece. The film makes for a very good self-aware film with genuine feelings and characters that are relative to any viewer.

The character of Dan, played by Mark Ruffalo truly steals the show and spurs much of the movie's feel of overcoming. Ruffalo was utterly superb and really carries the film, especially in the comedic department.

Overall, Begin Again is a great feel good movie with entertaining characters, a genuine plot, and overall, genuine thought-provoking reasoning on how we pick ourselves up, and how we deal with life.

Very much recommended for indie film lovers, and for those who like enriched movies.