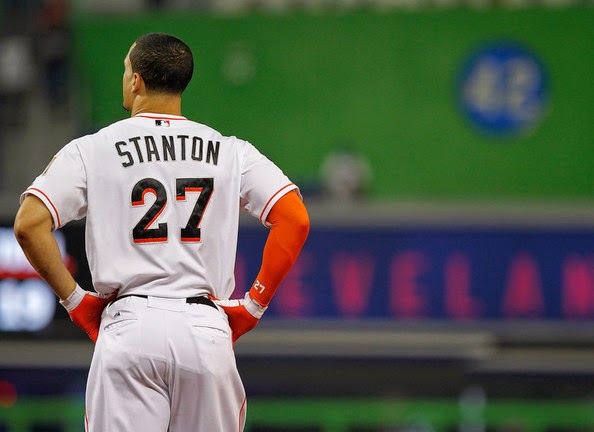 I'm still attempting to wrap my mind around $325M. After all, these mega deals always seem to offer great sticker shock whenever they are announced. $100M seemed like such a huge deal when the Dodgers gave Kevin Brown that type of money way back when. Then of course, A-Rod, ah yes, our favorite guy over in this little part of the internet here, received well over $225M from Texas, and then the Yankees decided to top the stupidity absurdity of that deal with $275M. And now, we have the $300M man, Giancarlo Stanton.

No matter how many times I read the workings of this new contract, I can't help but shake my head in disbelief. What in the world are the Marlins thinking?! How in the world will this affect baseball going forward?

$325M for over 13 years. Again, my goodness! And if that wasn't crazy, the Marlins are giving Stanton a full no trade clause as well as an opt-out clause after six years which is absolutely awesome timing as Stanton would be turning 30 by then. Depending on his career trajectory, Stanton could possibly opt out and make even more money. Imagine that?
Yet, regardless, $325M, 13 years, no trade clause, an opt out - that's a deal I wouldn't even agree to in a video game with fictional money.

And then of course, there is the obvious - the dreaded A-Rod comparison. However, while the Yankees with A-Rod, and to an extent the Angels with Albert Pujols and Tigers with Miguel Cabrera, have signed their superstar on the wrong side of 30, this one actually locks up a franchise player through his prime years. Not a bad move. Actually, a move we are seeing all around baseball with the likes of Trout, McCutchen, Kershaw, Posey, and others signing deals before they hit the market.

When looked at from that perspective, this might actually end up working out for the Marlins. Especially as they finally have a great core of young talent, a new ball park (despite that atrocity of an object they call art in center field), and now a certified and bona-fide star in Stanton who won't be leaving Miami in the near future.

Yet, as all long term contracts come do, this one, the largest ever in MLB history, will come down to the health, longevity, and continued performance of Stanton. In today's sports world, seven years is considered risky and rolling the dice for an organization. Ten years is accepting the back end of the contract will absolutely suck. I can only imagine what thirteen years is like. That's twice the years of simply being risky!

Regardless, this is where we are at in baseball. $100M contracts are cliche. $300M contracts are the newest and sexiest girl in the room. Despite the "prime years" angle, and the idea of locking up your face for the next thirteen years, there is just that overwhelming commitment that scares me. For the Marlins, having to go through the nightmare of a 13 year contract, and for one of my favorite players in the game, Stanton, for giving his best years to a franchise that isn't the most credible when it comes to support and it's commitment to winning.

But again, we're talking $325M for 13 years with a no-trade clause and an opt-out in six years.

Every time I type it, it's just as absurd.

And as we've learned in the past, there is always one team willing to do the absurd deal to take the business of the game to a whole new level.