Welcome to the Field: Initial Thoughts on Lucha Underground 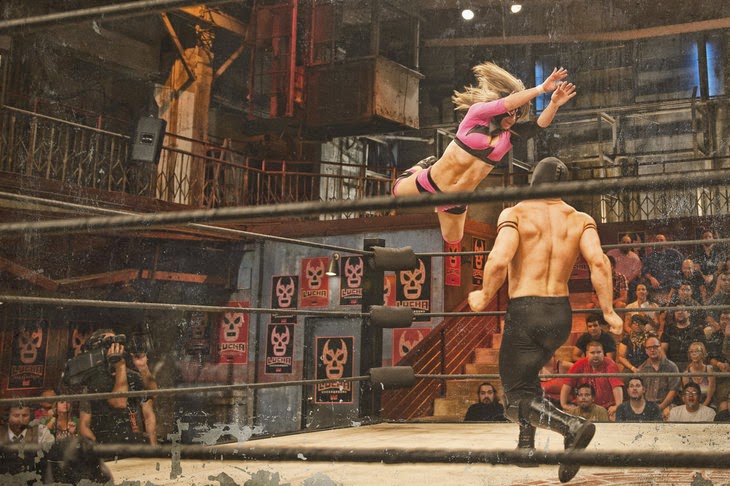 Pro wrestling finds itself in such a peculiar position as we near the end of 2014. While the industry suffers from a flat WWE product (World Wrestling Not Entertained), the hanging-in-the-balance future of TNA Wrestling, or the sudden slowed-to-nothing momentum of ROH - all of course in my opinion - the business is growing here in North America in a way we haven't seen in a long time.

As we await further information on Jeff Jarrett's upstart Global Force Wrestling, there is another option that is real and tangible for wrestling fans, Lucha Underground, which premiered this past Wednesday on the El Ray Network.

Now I'l be honest, I'm not the biggest fan of the Lucha Libre style. Much of what I've seen from AAA just isn't my cup of tea. I respect it, but it ultimately it isn't my favorite. Regardless, pro wrestling is pro wrestling, and with some time to burn I decided to check out the new show and promotion.

To begin, I don't have the El Ray Network, so I had to find a download of the show online. If Lucha Underground frowns upon that choice, I apologize. It's the only way for me to view the product, unless of course I do so in Spanish.

With that said, heading into the viewing, I didn't have much expectations. It's a bit unfair, but after the disaster that was Wrestling Society X on MTV, I couldn't help but think in the back of my mind that this project would be something similar. And yes, that was my fault for pre-judging and drawing ill-comparisons. Something us pro wrestling fans really need to stop doing.

Regardless, right off the bat the show's opening does a really cool job of explaining the art of lucha libre, it's history, and what looks to be it's main storyline surrounded by evil owner, Dario Cueto.

The show's feel is VERY different from what pro wrestling fans have become used to. And while there are somethings many may not like, simply because it is just that, different, you cannot deny Lucha Underground's feel is fresh because of the new concepts.

The show feels just like that, a show. With opening and closing credits, storyline scenes in between the action which feel more drama-like than what the WWE or TNA presents and has conditioned fans to. For a pro wrestling show, it does have a refreshing presentation. To those who are stuck in their ways of what a pro wrestling show "should look like", it may take some time getting used to Lucha Underground. Or, unfortunately, may not be to your liking.

Of course, it's best quality is in fact the camera angles presented for the in-ring action. This includes a very cool angle from above the ring. Something which makes you wonder why it hasn't been done until now.

The atmosphere and set-up in the building is also unique. Lucha Undergroud stays true with a warehouse feel surrounding, but don't be fooled, the show has great presentation and production to not make it feel cheap or low budget.

As for talent, which is always a huge plus and hook for us pro wrestling fans, there is a very interesting roster for the company. From the always solid Chavo Guerrero, the former John Morrison, now Johnny Mundo, a great talent in Prince Puma, and a woman who goes by the name of Sexy Star who wrestled a dude. Yes! Apparently inter-gender matches are a thing in Lucha Underground! Star was pretty damn impressive in showing some athleticism before her opponent, Son of Havoc, dropped a pretty nasty backbreaker on her for the pin.

Whoever this woman is in @luchaundrgrnd wresting a dude is pretty damn athletic. Wow.
— Dome Pondering (@DomePondering) October 30, 2014

Honestly, their match told an intriguing story, and really has me interested in both moving forward. Again, especially Sexy Starr. Very impressive in the ring. Very.

As for the rest of the roster, if you peruse the LU website, there are some other familiar and intriguing talents that could keep you hooked for the next few shows.

Calling the action and putting over these little stories are the tandem of Vampiro and Matt Striker. I'm a fan of Striker as he knows his stuff and presents it in a very articulate and intelligent way. I haven't heard of or seen (no more dreadlocks!) Vampiro since his days in WCW, but apparently he is a Lucha legend. Again, I'm not very educated in Mexican wrestling. But hey, maybe this is my foray into the style?

Regardless, Striker and Vampiro actually have good chemistry on the first show and they were definitely a plus to the presentation of the show. They can only build on it going forward which will only help the overall product.

Another huge plus was of course, the main event match between Johnny Mundo and Prince Puma. The match was given a substantial amount of time and really developed into a very entertaining match. I'm a huge fan of junior weights, cruiserweights, and X-Divsion action, so this was especially a treat for me.

Following the Mundo win, we got further storyline development with three men (who weren't named, but one of them was the former Ezekiel Jackson in WWE and Rycklon in TNA) attacking Puma and Mundo by request of Cueto. I like a show with a good foundation storyline, and this seems to be it moving forward.

After viewing the first show, I'll let you know this is NOT Wrestling Society X. This seems like a very, very polished product with a unique vision in how it wants to be presented and viewed to and by wrestling fans. I'm all for pro wrestling companies trying new ideas and being imaginative without compromising the art form, and Lucha Underground seems to be embracing this.

Is it perfect? Of course not. I find the whole evil owner shtick to be a bit played out, especially when the Mr. McMahon character set the bar so high. Also, the crowd seems a bit directed and coached rather than organically emotional. But again, this is just show number one of hopefully many more to come.

The wrestling business needs more options. And for the first time in as long as I can remember, we are getting just that.

Welcome to the field, Lucha Underground. Here is to hoping you stick around.

And yes, give us more Sexy Star!