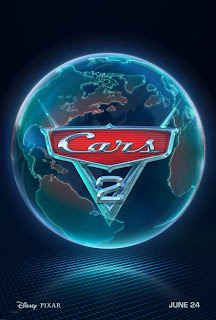 Mater is finally invited overseas with his best friend Lightning McQueen for the World Grand Prix only to get wrapped up into espionage, and an elaborate energy scheme.

The opening scene where Finn McMissile boards a boat that hovers over the major oil refinery, and eventually leads into a major chase scene with gagdets and escapes that mirror a cars-version of a James Bond film.

Finn McMissile: My apologies, I haven't properly introduced myself. Finn McMissile, British intelligence.
Mater: Tow Mater, average intelligence.
---
Mater: I'll have some of that there pistachio ice cream.
Sushi Chef: No, no. Wasabi.
Mater: Oh, same old, Same old, what's up with you?
---
Sally: [Sees Fransisco on television] He's so good looking, what, with those big, open wheels...
Lightning McQueen : Wait, what do you got against fenders?
Sally : Nothing! Nothing.
Lightning McQueen : What's wrong with my fenders?

Cars 2 is a cute movie. It's fun, enjoyable, funny, and overall, harmless. Most of the main characters return for the sequel of the land of cars, but with a shift in focus as Mater becomes the focus of the film, and not Lightning McQueen.

However, as the norm with sequels, most want to know if it is as good as the original. The answer here is unfortunately,  no. While Cars 2 does not live up to the magic that was presented in the original, the plot was an interesting one that will leave the viewer guessing up until the very end of the movie. Something that separates it from the lovable, yet, cookie-cutter, PG, plot of the original.

All in all, Cars 2 is still a very good film that is an easy watch. Some of the espionage scenes and the scenes of Cars doing human things will provide the moments that will make the film.

A very good watch. Not as good as the orginal, but surely a solid sequel.