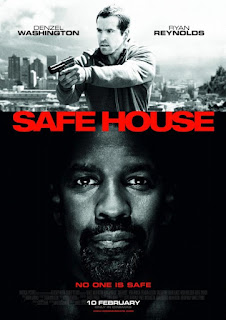 A young CIA worker who simply guards safe houses finds himself on the run with one of the world's most wanted fugitives after the one he works in is attacked.

After being told to back down from chasing Frost, Weston continues his pursuit of bringing in Frost. After saving Frost from his attackers, Weston pummels one of them until he finds out they were sent by the CIA.

"You've done a fine job, Son. We'll take it from here.' That's when you know you're screwed."

Safe House is a film that is highly entertaining. With a unique plot and it's innate ability of turning the bad guys into good guys, and good guys into bad guys as the film progresses, Safe House has a nice plot with great action, and superb acting. After all, it is quite hard to go wrong with Denzel Washington and Ryan Reynolds leading the way.

However, the only draw back to Safe House is how predictable it is. As the movie moves, you are able to begin putting the pieces together, with most viewers having the ending in mind at the mid-way point of the film.

Recommended for the 115 minute run time.