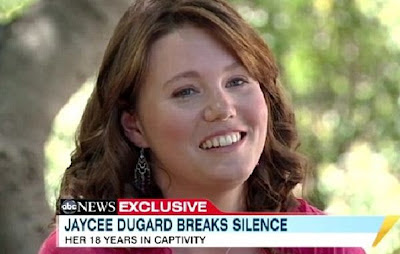 Memoirs aren't usually my favorite type of readings as they are usually vain and conceited in thought. However, I recently finished a memoir that really changed my outlook on a few things in life, including this little blog here called Dome Pondering.

The book I am referring to is called "A Stolen Life", which is the memoir of Jaycee Lee Dugard. Yes, that Jaycee Lee Dugard. For those of you who are not familair with the name, Jaycee was taken in 1992 at the age of eleven and held captive for eighteen years by her kidnappers. She was eventually found in 2009. For more details, you can read the entire story here, and here.


I was intrigued by Dugard's story even more when it became national news that she was penning her memoir. In fact, I found it interesting that someone with her story - her unbelievably tragic story - was willing to share with the world her horrific experiences in such a raw way. What surprised me once I began flipping the pages in this book is that Dugard not only had (and obviously still has) a passion for writing, but she did so while being kept captive.

The addicting and powerful book has many real journal entries, detailed descriptions of her time in captivity, and powerful reflections. It's not an easy book to get through, especially for the faint of heart. The gruesome details of being raped repeatedly, forced into sub-standardized living, and mentally broken into developing Stockholm syndrome is interesting, but really breaks your heart. Sometimes, you have to step away from it  before moving on.

However, for someone who has only a fifth grade education, Dugard's ability to write, communicate, and express herself is not at all terrible, and it very much shows in the memoir. In fact, it is downright amazing the ability she has for someone with such little education.

Despite her impressive writing ability, as I slightly mentioned before, the biggest aspect I took away from her memoirs are the power of thoughts, words, and truth. She discusses how writing and living a transparent life through her words not only help her get through things, but it also builds a bridge for others into her life.

While I don't come close to having the type of experience to write about, I understand her feelings on the power of writing and how it not only liberates you, but can be the best outlet in living a thorough and true life.

Not many people in this world have the ability to openly discuss their experiences, fears, failures, dreams, aspirations, downfalls, and darkest moments for the world to see. In a world of Facebook, Instagram, and Twitter where it seems only positive and our greatest moments are shared, it takes a certain type of will to be honest - thoroughly honest.

Similar to Dugard, and other bloggers that may do the same, I can relate to that, as I try to keep this blog as open and as transparent as possible. Devotees already are aware, I always say, I've never lied to two things in my life: God, and this little blog called Dome Pondering. A hopefully, when I'm old, or even gone from this earth, this blog can serve as some odd type of story letting others into my life.

"A Stolen Life" is a slice of that refreshing honesty in the deepest thoughts of an individual, whom during eighteen years of pure hell, got through it by jotting down her thoughts and honest feelings.