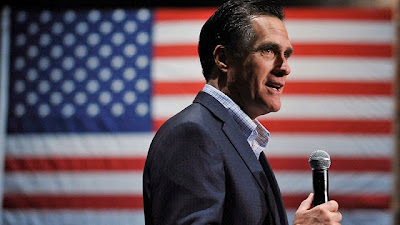 This election was almost cake for Mitt Romney. It really was. For President Obama, who ran on "Hope" and "Change" and hasn't produced much in terms of domestic economic growth, the material, evidence, and hard facts were on the table. Romney simply had to drive it home with the American people. However, that seems to be his biggest problem in his entire campaign - his ability to connect with - as President Obama has no coined - Main Street.

I've stated as early as the Republican primaries that I was not a fan of Mitt Romney. In fact, I was in favor of an Obama/Santorum showdown. Nonetheless, since the initial Iowa debate, Romney has sounded like a phony to me. A fraud. And as I stated in a post earlier this year, Romney just evokes "car salesman" whenever he opens his mouth. From the moment he foolishly offered a ten-thousand dollar wager on national television with his fellow republican candidate, Rick Perry, in the middle of a discussion on healthcare, employment and the state of the middle class, Romney has just seemed out of touch.


And as we now head down the stretch to November, we are seeing this issue come to the fore front.

While it's true we have not heard from Romney and the GOP on their actual plans (not just empty rhetoric) to fix the economy, there are many other issues Romney has offered his insight on that does indeed seem like a way to help our nation. And yes, his business background, something he has been pushing heavily, is something that cannot be dismissed.

However, once again, no matter how qualified (or not) Romney seems to be, he simply lacks that charm, that overwhelming charisma, and that down-to-earth, "hey-I'm-just-like-you" persona that President Obama has.

Sometimes, in the midst of legislation, big economic models, unheard of foreign affairs, fancy bills, and other political fluff that causes a lot of people to turn away from polls (which they really shouldn't!), the candidate you relate to is the one you feel most comfortable punching the ballot for.

We all want someone that understands what we go through everyday, and not someone looking to pad their resume.

And with his recent statements of claiming a household income of $200,000 is considered middle-class, and of course the latest video of him stating forty-seven percent of America rely on the government, Romney's campaign is turning this election from one he could have won, into one for President Obama to lose.

Simply check out the latest poll by Yahoo on Americans ability to relate to Mitt Romney.

Whether you are red, blue, or wear no color or stripes in your political affiliation, one had to admit this election was up for grabs. President Obama's track record for hope and change four years ago has not been entirely met, and the presidency was there for the taken.

There is still time for major damage control to spin this in favor of Romney. And maybe a large portion of this country isn't moved as much by these comments to overlook President Obama's shortcomings.

However, personally speaking, I always give every candidate the benefit of the doubt, disregarding their political affiliation to sell me on why I should vote for them. And even after the primaries, and through all of this, I still feel like I do not know Mitt Romney. I'm still waiting for that moment when he arrives as a serious candidate, and not someone seeking a promotion in title.

From the recent Yahoo polls, it seems many other Americans are waiting as well.

He has two months left. Only time will tell.