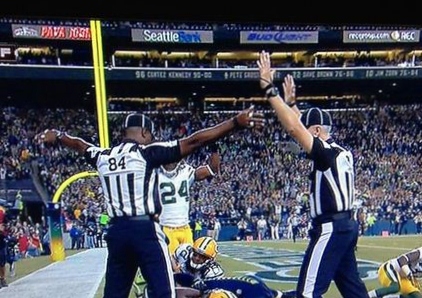 That was my initial reaction to the on-the-field call of touchdown to the now infamous play that closed out last night's Monday Night Football contest between the Seattle Seahawks and the Green Bay Packers.

That was what I thought upon seeing the replay which affirmed by live reaction (and probably yours too) to the controversial play.

Except it wasn't. And today, the NFL supported the blown call, the replacement referees (who are now the biggest enemy in the United States) and their lousy decision.

The immediate reaction and fallout we have seen is the overwhelming coverage and review of the now notorious replacement referees. Twitter exploded, sports radio was full of opinions, and even non-sports news platforms like CNN had the story as their website's headline.


Heck, even President Obama's twitter got in on the action!

The general consensus is that these replacement referees are terrible and Roger Goodell is the worst person on earth for not simply settling with the real referees.

While still true and varying on overreaction at the same time, I believe last night represented the revealing of a truth we all do not like to face when it comes to our precious league in the NFL. A truth that has been in front of us for so long, but we did not want to realize or accept.

Now, I'm not saying this will cripple the business of the NFL, or even set it back in any sort of way, as we all know that is absurd. However, everyone involved in this situation but the replacement referees are a fault here.

Speaking of replacement referees, can we get off their backs? It's so easy to scream, chant, and shout at someone who is clearly not equipped, prepared, or qualified to call the most complicated game in North American sports. Actually, it's such a cop out. The job is hard enough for the experienced and qualified referees. But let's take a rational approach to this: what does anyone expect from crews that were calling High School and Division III football before being summoned to this stage?

The game is faster. The atmosphere is pressure packed. The stadiums are larger. And there is a lot of money riding on every decision or call they make.

It's not their fault. They are doing their best in a tough and nearly impossible situation.

However, the NFL felt this was a viable option to help sustain their $9 billion product in the midst of a labor dispute with the "real" referees. Referees who are currently making $150,000 a year for part time work, while still having full-time careers.

I agree it is clear they have a talent that is unique and in high demand. While I believe the proposed salary increase is ridiculous, it is nothing but pennies in the grand scheme of $9 billion.

But here is the thing, the NFL has taken everyone for granted. You. Me. Them. Us. Everyone.

In fact, this has been going on for sometime now in various aspects. And shockingly, the NFL has gotten away with it for one reason - because we allow it to.

We've seen other countries, other leagues, other entity in sports deal with various topics from steroids to referee scandals to usage of instant replay, and are completely bashed for their action, or even lack thereof. And whenever such issues arise regarding the NFL, it seemed we all gave it the ol' waive of the hand and turn of the other cheek. Eh, no big deal.

All of it to name a few, waived off as, ehh, no big deal.

The excuse usually given is, "no one cares", as long as the NFL is still on TV and fantasy football champions are declared, it's OK, right?

Some even defend the league, and we often hear that misguided, uneducated, and oh-so lame line of "more leagues need to adopt the NFL model"

Last night was finally an eye opening moment where we as fans, as Americans, realized that the league we so blindly defend as a nation, as a society, and as fans, have taken us for granted. And after this morning's statement by the league to stand by the call, to officially alienate and insult us.

For a moment, the wool was finally lifted from our eyes.

Too bad it won't mean anything. As we'll be back on our couches in one week to pick up where we left off.

The truth was nice while it lasted.