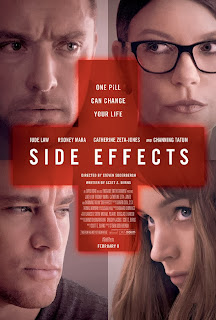 A woman's world unravels (and becomes exposed) when a prescription drug prescribed by her psyciatrist has revealing side effects.

After attempting to get his life back, Dr. Banks begins to take the investigation into his own hands, including an experiment where he reveals that Emily has been faking the entire time.

"Depression is an inability to construct a future."

"Imagine everything you ever wanted shows up one day and calls itself your life. And then just when you start to believe in it - gone. And suddenly it gets very hard to imagine a future. That's depression, right?"

Side Effects is a film that blends a good a dose of mystery and crime solving along with the revealing nuances of the psychiatric field and the pharmaceutical industry. The film has a great plot that causes the viewer to not only question the uncertainty of psychiatrists and the drugs that are prescribed, but simply the overall ethics involved with it all.

Rooney Mara is good in this film, however, Jude Law was even better as the desperate psychiatrist who goes from feeling guilty to feeling like a victim. Channing Tatum was also involved, but really didn't contribute much other than a major cameo.

Ultimately, Side Effects is a solid mystery film that will intrigue you enough to keep you entertained for its 104 minute run time.