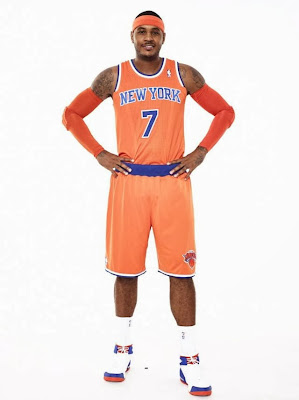 One of the good aspects about having a blog and being truthful and honest about it, is the hindsight thought process it provides. DP devotees already know how much I love my New York Knicks, and how excited I was about their new jerseys last year. It was a new look that was desperately needed (DP Review On Knicks New Uniforms).

In reviewing those jerseys last year, I had the following comments in regards to then-rumors regarding the addition of an alternative orange jersey for the Knicks and overall NBA changes to the Christmas Day special jerseys:

"As long as we do not add an "alternative jersey" (I read rumors of an orange one - woof!) (and the league-wide Spanish jerseys are fine). And please, please - PLEASE - let's finally do away with the awful green jerseys we feel the need to wear on Christmas and St. Patrick's day! Pretty please!"

With alternative jerseys now in the regular rotation for the 2013-2014 Knicks season, I'm now forced to embrace the dreaded orange alternate jersey. After all, what used to be tradition and part of the historic charm when it came to sports franchises and their identifiable uniforms, has now become an opportunity to maximize jersey sales. The door pretty much was kicked open once the Los Angeles Lakers started wearing white jerseys, and will expand on that by the addition of black ones this year.

Soooooo, with that said, let's take a brief review of the new alternate Knicks jersey.

Right off the bat, it's bright, it's obnoxious, and the orange is a bit weird. It's not quite a bright orange, or a strong and solid orange, but it seems to have a certain lightness to it that really can go either way for me. I'm not totally against it, but I'm not in love.

In fact, I'm really not in favor of the Knicks shifting the focus of their main color to orange as opposed to blue, the way it used to. After all, the paint of the home floor is indeed orange (unlike the old days), and I fear home games wearing these jerseys will be hard on the eyes.

And of course, being in New York, we're going to get a lot of comparisons to the Syracuse Orange.

Orange isn't exactly a flattering color. And some bigger guys will just end up looking like huge versions of Otto, the Syracuse Orange mascot. Okay, maybe not that drastic of a comparison, but you get what I mean. Lots of orange on some body types may not be the best fit.

Not to mention, the Knicks have quite the amount of players on their roster who wear accesories (headbands, arm sleeves, wrist bands, etc..). If they don't break up the orange with some blue accesorites...this could get bad. Like Christmas Day uniforms bad. 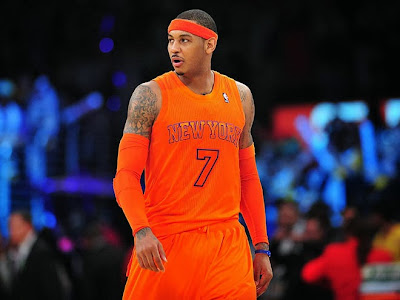 I'll be completely honest, the more I look at the uniforms, the more I'm intrigued by them. Alternate jerseys usually have a different look, and at least, the Knicks kept the traditional "New York" across the chest and simply inverted the colors.

The best to come from this addition is the fact that not many teams in the NBA feature the color orange (Suns being the only prominent team). With an all-orange uniform, the Knicks new look could further their identity around the league.


All in all, I'm not overly thrilled with them, but I've come around to them a bit more than I did last year, and of course, when they were first announced. I have no choice. I'm sure if they win, I'll learn to like them. But if it were up to me, I'd keep the traditional home whites and road blues as the only uniforms in the rotation.

As long as those green jerseys don't return, I'll be alright. I don't think I'll ever come around to liking those.