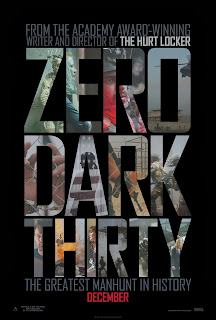 The scene in which they raid the compound believed to be harboring Osama Bin Laden.

Patrick - Squadron Team Leader: [to member who shot Bin Laden] Do you realize what you just did?

I was very intrigued by Zero Dark Thirty going into viewing it. Obviously, based on a true story, the actual plot isn't much of a surprise and isn't going to really shock you. With films like this one and World Trade Center, it's important to deliver in a unique way. And usually, that delivery comes with the responsibility of giving the viewer an insight they didn't have before.

Well, Zero Dark Thirty knocked this one out of the park. From the insight of the misleads, the politics, and worries stemming from the Iraqi WMD situation, to the overall gut instinct regarding the whereabouts of Bin Laden, the film let many in on a small piece of the big picture on what it was like working and chasing the world's most wanted man.

It's a film that is a great refresher and even educator for those who didn't originally follow the decade-long pursuit, and is quite frankly a film I think everyone should see based on the events that took place on 9/11, and what eventually followed it.

The scenery and authenticity of the languages and culture also helped to make the movie something more than just a rehash, but that of an epic film.

I'd urge you to give this movie a watch when you are done. It'll leave you with an appreciation for those that keep our country safe, who do so thanklessly everyday.