To Giant Fans: Shut Up And Appreciate Manning 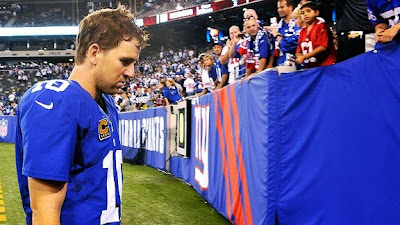 Usually, I don't get into the affairs of other teams and the issues their fan bases face. For the most part, the teams whom I root for and emotionally throw myself into have enough conflicts, dilemmas, and controversy for me to deal with. All you have to do is take a look at the amount of vents and posts yours truly has in the archives of this very blog during those "Isiah" years for my New York Knicks.

Yet, as a New York Jets fan who continuously hopes each year is the year, or heck, even just a decent year, it bothers me to hear Giants fans lately on the state of their New York Football Giants team, more specifically, Eli Manning.


I'm sure being 0-6 for Giants fans is hard for them to take right now. Once again, I'm a Jets fan, so I'm very familiar with losing during the NFL season. However, the recent majority feedback that is blaming Eli Manning for the team's struggles is baffling. Actually, the continued assault on his character by a select few is downright annoying.

I'll be the first to admit as a Yankees die hard, there is an overwhelming spoiled nature that has infused the fan base. A fan base so accustomed to winning and good times, it often doesn't appreciate or understand how good they really have it.

It seems with the recent 0-6 start, Giants fans have adopted that same spoiled nature, but have taken it to another level.

"Eli Manning has really never been a good QB"

"This is all on Eli. He looks awful."

"It's time Reese [referring to Jerry Reese, New York Giants General Manager] begin the search to draft a new QB, or to find a place for Eli to go"

These were all quotes heard on WFAN, a New York sports radio station. All quotes indicative of a spoiled fan base. All quotes, in my eyes, that simply sound like a bunch of whiny babies.

The problems facing the Giants are much larger than Eli Manning. For starters, how about that terrible offensive line? The running game, defense, and injuries are some other noteworthy selections if you will. It's not unreasonable to make the statement that Eli Manning is part of the solution more so than the problem.

I cannot understand how a two-time Super Bowl MVP is being treated like he is. How a quarterback who is as clutch as he is, and has won so many big games for that fan base, is being given a such a hard time. He is possibly the greatest Giants QB of all-time. 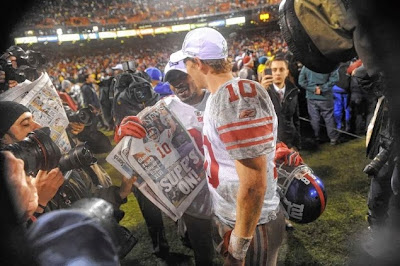 Those are all qualities in a QB many other fan bases across the NFL would love to have. Heck, I've yet to see a consistent Jets quarterback in my lifetime. But I digress.

I guess my message to Giants fans is this: Shut up, and appreciate what you have, before it's gone.

Because one day, Manning will be, and you'll regret all of this foolish banter.