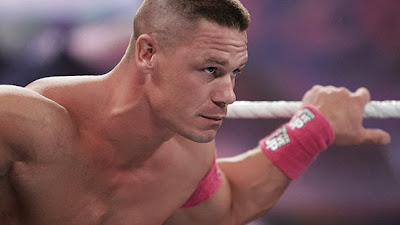 The WWE likes to proudly proclaim John Cena as the "most polarizing" superstar to ever grace its company. And really, it's hard to argue with that statement as Cena evokes emotion from many, actually all, wrestling fans. Either you cheer for him, or you undoubtedly roll your eyes at every moment he's on your television screen.

It's the unique reaction rarely seen in pro wrestling where a wrestler is cheered by half the crowd, and ultimately jeered  just as loudly by the opposing half. It's the type of intriguing and perplexing reaction Bret Hart received in the late 90's when he was ultimately booed in the United States, but suddenly became a huge babyface outside of these great borders.

Cena evokes emotion, and it's a quality that pro wrestling thrives on. It's what keeps Cena as the company's...heck, the industry's top guy. Yet, still why the hate for a leading talent in such a competitive industry?

I respect the heck out of John Cena. If you strip away all of the merchandise and all of the hand-waving in front of the face, Cena is what any wrestling promoter or president would want in a franchise wrestler. Really, he's what any employer would want in an employee.

Cena is incredibly dedicated to the wrestling business. He is marketable. A great figure for children. The charity work he does for the Make-A-Wish foundation is incomparable. And take it from someone who enjoys fitness and has tried Cena's routine, the dude is a beast.

No pro wrestling fan can deny his dedication to the craft, and to be honest, as trendy as it may seem to insult Cena, he can indeed wrestle. And when he does, he'll give you 100%, all the time.

To put it point blank, if every company in the world were to place their wrestlers in a pool, and a draft were constructed, I'd have a hard time believing Cena wouldn't go number one. What promoter with any business sense would select another wrestler over Cena?

So then, why the hate? Why the backlash? Why the "Cena sucks" chants? Really, what gives?

Why does Cena evoke such disdain from a section of the wrestling fanbase, typically male adults? This same fan base points to the bright t-shirts and the ultra-corney mantra of "hustle, loyalty, and respect". Others despise what is comparatively this generation's Hulk Hogan. But really, in the mix of everything else, are those valid reasons?

A light bulb went off in my head this past Monday when Cena, on his first Raw since capturing the World Heavyweight championship in his first match back the night before, defeated Damien Sandow with one arm.

Yes, one arm. After Sandow attacked him and cashed in his Money in the Bank briefcase, Cena still won.

Once again, with one arm.

At that moment it dawned on me, are wrestling fans anger directed in the correct location?

Look, Cena is who he is at this point. But as a fan it's hard to truly get behind Cena when he always overcomes. When he's always on your television screen. When he's always thrown at you as a fan with the statement - "look, here is John Cena. Like him!"

Part of the ebb and flow of characters in pro wrestling are their rise and fall within the pro wrestling world. Their losing streaks, and eventually their rise to glory. Good vs. Evil. And the ultimately overcoming of evil. Pro wrestling is simple. Yet, the story of John Cena seems so overdone, that not many adults believe that he has a threat. It's unbelievable to think Cena will ever lose. Therefore, it's pretty darn tough to invest in him as an adult.

Honestly, the character of John Cena has become jaded in it's existence.

The character of John Cena has been built up similarly to super heroes, indestructible forces, the white knight in shining armor, and other mighty, fictional comparisons, all lore in which kids and females attract to. Go figure.

The WWE wants their top guy to be perceived this way. They want Cena to be polarizing. It's not natural. Not at all. It's manufactured. Yet, "polarizing" John Cena is money.

And kudos to the WWE, because they sucked us all in...and continue to do so every single week. The popular "Let's go Cena-Cena suck" dueling chants are more of a figment that true feelings anymore. It's almost conditioning. And no one is better than the WWE at doing that with an audience.

Cena is simply doing what John Cena does best - being the company man. Being the franchise for Vince McMahon's company. After all, "he's the franchise and he's shining now..."

Cena is just doing what he's told and what's given to him to work with.

You can't blame him for what you hate.