2014 State of the Union Reaction 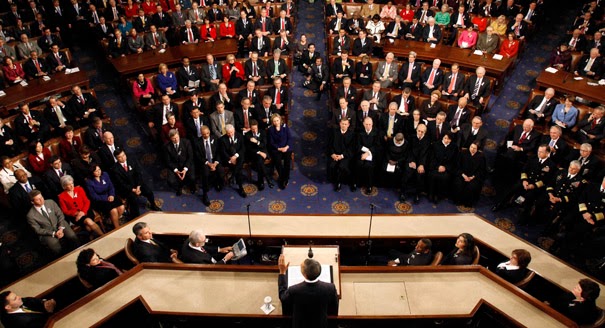 If you read (which you should) the Dome Pondering 2013 Year in Review, you know that I wasn't particularly happy with the year of results from our President. Receiving the Dome Pondering "Biggest Letdown of the Year" award might be fun and games, but in all seriousness, the first year of President Obama's second term was a disaster.

Because of that, I really was looking forward to his State of the Union address this year. Would he acknowledge the tough year? What are his plans? What key issues will he touch on? Of course, what are his plans to solve them?

Barring a few points, unfortunately, much of the President's rhetoric sounded like something we've heard in the past. President Obama is such a great, charismatic, and gifted speaker, it becomes easy to get lost in the realm of his charm, but this year's speech sounded very similar to last years.

I appreciated the statistics in his opening remarks regarding the improvements made throughout the nation in the housing market, manufacturing, and home-produced oil. All great, which is very nice to know, especially when it sometimes feel like progression isn't being made, but, his other points regarding natural energy, middle class reestablishment, immigration reform, and education importance seem like more rhetoric, though very important issues, that take a back seat to Healthcare reform aka "Obamacare".

It just felt like President Obama built up these issues toward talking about healthcare reform, still treating the idea like his personal project. After all, truth be told, it will be his signifying trophy on the mantel next to being the President to capture Osama Bin Laden, for lack of a better analogy. The President touted lofty sounding numbers and threw in some pathos with a story about a woman who received surgery right after registering for the Affordable Healthcare Act. Of course (not that I expected him to), he never mentioned the many who have lost their health insurance and have been inconvenienced by this new initiative.

Maybe it is because we hear about it frequently and it is such a hot topic, but it seems like since he has been president, the Affordable Healthcare Act has been his main focus, with other issues and topics taking a back seat. Which is probably why this song and dance feels very, very similar.

However, despite the somewhat stale feel of the speech, I must give him credit, there are some other things that I took away from the State of the Union address, and one in particular that really got me fired up.

- The President's emphasis on early education and the push nationwide for it is something that got me really excited. DP devotees would know how much I believe we need real education reform in this country, and starting the movement towards mandatory early education for our children is something I believe leads us in the right direction.

I also felt like standing in my living room and applauding like I was in the chamber to this quote: "The problem is we're still not reaching enough kids, and we're not reaching them in time. That has to change."

- "And I'm reaching out to some of America's leading foundations and corporations on a new initiative to help more young men of color facing tough odds stay on track and reach their full potential."

This really peaked my interest as I was hoping the President would go further, but he left it at that after stating he wanted those same opportunities he and Mrs. Obama enjoyed for everyone.

I truly hope at some point, especially now in a second term where he doesn't need votes or support for future elections, that he truly gives an honest speech directed to children of color. As one myself, I can honestly tell you the community needs it. And what better person than from President Obama. Someday I guess...

- Increased Minimum Wage and Equal pay for women? I still can't believe these are topics of discussion and debate in 2014. Get it done already.

- I still think our government is too involved in things such as school loan deferment and retirement savings options. Sure, social security is tanking, but I still believe retirement options and it's responsibility should be left to the individual. Why do we, as a nation, need to "encourage" others to do this?

- Wasn't overly crazy about the international policy laid out, but I'll say this, President Obama has been very revealing and transparent of his intentions when it comes to war and international issues. I get the idea and am in agreement with the plan to slowly exit Afghanistan, but sometimes this feel likes the war that just never ends.

- I totally agree with the idea of getting immigration reform done. Our laws have too many holes, aren't clear enough, aren't strict enough, and at the same time, aren't practical enough to keep innovation and development in our country at a high level without jeopardizing the integrity of our population and its needs.

As the son of two immigrants who came to this country the right way, I believe there is a way to get this done. Those who are opposed to immigration reform altogether are flat out xenophobic, and are the ones who truly cheapen the essence of the "American dream". Just my opinion. Just bloggin'.

- And finally, while the buildup to his big healthcare issue left me a bit jaded regarding his rhetoric, the story regarding Seargeant First Class Cory Remsburg was fantastic. Absolutely, fantastic! Such a touching and emotional story (and well placed by the President's speech writer). Just amazingly, fantastic stuff.

"My fellow Americans, men and women like Cory remind us that America has never come easy"

Damn, after that was said, I seriously just wanted to find a way to be a better American.

I might be a bit skeptical to some of the issues discussed, I guess until really seeing action, but I can't deny that the President's closing comments didn't leave me excited to be an American, and even more driven to get involved, in any small way may it be, in attempting to change our country for the better.