Extinct! - The Disappearance of the Pure Wrestling Fan 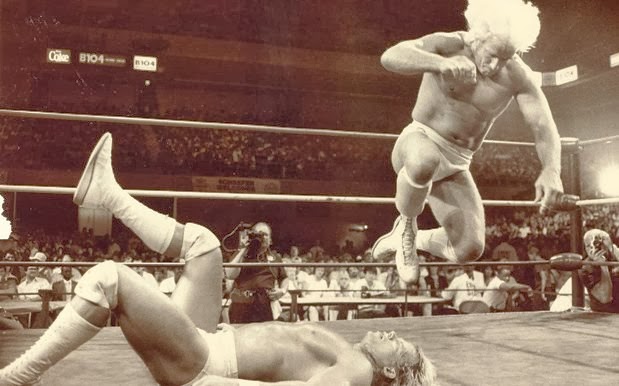 When I was younger, I remember eagerly awaiting my father to come home from work on specific days. Sure, I was happy to see him, but most importantly, I knew he was bringing home VHS cassette tapes of wrestling. We didn't have cable, couldn't afford it, and if we did, we surely weren't going to order pay-per-view. But he did have a co-worker who would tape the events and send them home with my dad for me.

I watched everything. Seriously, EVERYTHING. I watched WCW. I watched WWF. Once I found out about the other tapes he had (SMW, ECW, AWA, NWA), I watched those too. If it was professional wrestling, I was into it.

Coming off a week in which I watched Raw, Impact, Smackdown, New Japan Pro Wrestling's Wrestle Kingdom 8 event, and this week's Ring of Honor TV, I had a heavy dose of wrestling. And yes, a good variety of it. Again, I have this sick addiction to pro wrestling. Always have. At this point in my life, I'm sure I always will.

Yet, in this same week, I've seen many comment and bicker over the ending to Raw and ridicule part 1 of a highly anticipated "Genesis" version of Impact. What was once a fanbase of pro wrestling fans who loved pro wrestling has now become fractured.

Today, because they have a bit of an inside look on the world of pro wrestling they are privy to because of the internet, some fans believe that they are now experts on what "works". Because of this, many have lost their ability to be fans as they cloud their judgement with nonsensical beliefs about what "should" be done, or what's "best for business." Fans are opinionated than ever before and will not only do so on what they prefer, but will not hold back on the other companies they do not like. This has lead to the idea of the pure pro wrestling fan becoming extinct or close to it.

Today, pro wrestling fans seem to take their likes and dislikes as a blueprint to create barriers in their fandom. Pretty much, a "how to" on where to place their rooting interest, and what company to hate. Sometimes, the interest is casual and just one company. Others choose what company they are fans of and believe that everything outside of that company is terrible. The combination varies, but just like pro wrestling has good guys and bad guys, fans now have their faces and heel companies as well.

More shocking is that in an industry that isn't really competitive, fans who now have this fractured way of thinking are more competitive with their fanhood than the companies really are.

Isn't it ironic that fans point to the Monday Night Wars as the greatest period in pro wrestling history, yet, it was during that time when fans were just fans. Not just WCW fans, but WWF fans as well. We flipped between both, and that's what made Monday nights special. And on Saturday nights, we watched that small renegade promotion in Philadelphia called ECW. That is what made wrestling so much fun. We forced the companies to fight for our loyalty. Today, we simply give them up.

With such strong loyalties, the pure wrestling fan is a breed that is becoming more and more extinct by the day.

Today's wrestling fan falls into one of the following categories:

They more than likely grew up watching the old WWF, had memories of greats, and will tune into Uncle Vince's program because it is what they know.

They are casual wrestling fans, and because the WWE is the standard medium for pro wrestling as the industry leader, it is what they tune into. Everything else just seems like fodder for the crazy wrestling-geeks.

WWE or Nothing Fan

This is the fan that is aware of other companies, but pretty much just watches WWE only programming. They'll dabble maybe if bored with TNA, but for the most part, WWE is again, the standard bearer, and loving pro wrestling in their minds is loving the WWE.

These fans are usually sometimes annoyed with WWE's "entertainment" and look to ROH to fill that pure in-ring product need. At the same time, watching TNA is a waste of time because it's number two, and number two is just a pretend number one. For most of these fans, slumming it is ROH, and is their way - their right of passage if you will - to claim they love pro wrestling.

They love the company and all that it is. Usually fans who remember what life was like after WWE folded, and needed something outside of what WWE was delivering. These fans usually would watch WWE, but typically with a chip on their shoulder for the double standards in fan interest/reasoning.

Boy do they hate the WWE. Usually contrarians to the mainstream, these fans prefer to support the companies that do not insult their intelligence or take advantage of their fandon when it comes to entertainment and pro wrestling.

Very similar to the TNA fan, they embraced ROH during the period of a complete monopoly on the wrestling business by the WWE. These fans will find every chance to laugh at the WWE's "sheep-like" fans, and has a envy-fueled hate towards TNA because it has what they believe ROH will "someday have" as the number two promotion in North America.

These fans are the first ones to tell everyone else they know nothing about pro wrestling and will trash it all at every moment. They will refer to promotions never heard of, companies in far regions of the world, and will often come up with obscure wrestlers who are better than the main stream grapplers we all know.

These fans understand it's all different. All of the companies. But they can't shake this addiction called pro wrestling and will watch it all with the same mindset and the same joy.

Now I know some of you are saying, "don't you ever grow frustrated with some of them?" Absolutely! I'm human, and there are days I like some products more than others. For example, as of right now, ROH has been highly intriguing along with NJPW. On the other hand, I find WWE, which usually ramps it up for Wrestlemania around now, very stale as they resort to older guys and the same old match-ups, something their fans would be the first to criticize other companies for doing. But I digress.

Nonetheless, that could all change in a week. As it usually does.

While I believe the Pure Pro Wrestling Fan is becoming extinct, I also understand because of this growing trend to dislike companies you do not watch, there is no saving the pure wrestling fan. Whatever is left of us worldwide is what is left of this kind.

And to me, that is the saddest thing going on in the world of wrestling.