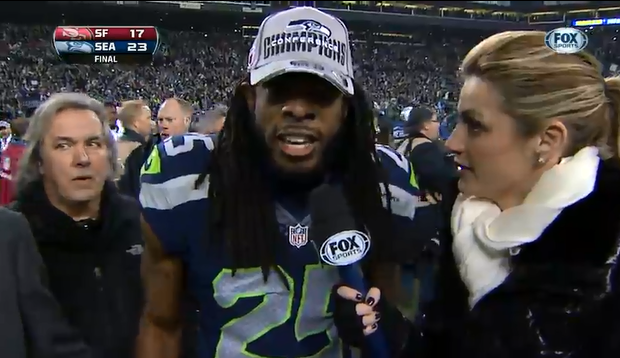 It's safe to say Richard Sherman is now a household name. After the now infamous interview with Erin Andrews, which more resembled something that belonged on pro wrestling programming, the nation took aim and fired away at it's new public enemy number one. After all, his comments were shocking, far from the monotonous, repetitive jabber we are used to. You know, the rhetoric that is probably an already prepared statement in the NFL's handbook for athletes on how to handle the media.

No one saw it coming. It was live television, and it was raw, emotional, and as real as it gets. Something we don't ever get after these games. Rasheed Wallace's epic, "Both teams played hard" mantra immediately comes to mind. Gotta love that awesome presser from 'Sheed. Classic.


Yet, Richard Sherman's name trended on Twitter for several days. The media ate up the controversy. Fans fired names and racist slurs at Sherman as their reactionary opinions. After all, we are not used to this. How dare you talk like that? How dare you show emotion after a game?

With all of the hate, the Stanford graduate, Sherman, delivered an amazing interview on CNN where he discussed the situation, showed poise, intelligence, and grace, all while apologizing for the situation.

Look, I had no problem with Sherman's antics. Seriously, none. In a game where brutality, harnessed anger, emotion, and testosterone running wild are key components for success, it's hard to expect anything different. Actually, it's foolish. Especially, minutes after making the biggest play of his professional life to send his team to the Super Bowl. And against a foe? Cmon, let's all be real with ourselves.

Taking it one step further, I enjoyed it. It was entertainment. It was live TV at it's best, and Sherman didn't say anything offensive or derogatory. I'm sure the one-liners these days in your favorite TV show are worse.

Do I agree and would I endorse those antics? Absolutely not. I thought the real issue at hand should of been his "choking" gesture towards San Francisco 49ers quarterback, Colin Kaepernick. But, hey, that's just me. Just bloggin'.

But of course, the kicker in all of this is the issue of race. Sherman was lambasted with tweets calling him the "N" word, referring to him as a "monkey" and other hateful messages that rivaled something out of the 1950's. We're calling Sherman classless? Come again?

So some have issues and racist, hurtful, feelings towards blacks, but are alright with them playing football and being entertained by them every Sunday? Hmmm...that's another (larger) social topic for another post.

Nonetheless, I hate when racism is used as crotch for reasoning in every situation the way it has been lately, but I have to believe a driving force behind this is the idea of a yelling, aggressive black man and the interviewer being Erin Andrews, a white attractive woman being the image on everyone's screens.

The image still evokes sociological and subconscious racist stereotypes from history. After all, Bart Scott never received this backlash in his emotion-filled interview. What if the roles were reversed in the races? What if John Harbaugh snapped on Pam Oliver, would this have been as big of a deal? Would the tagline and reaction be similar to what Sherman was branded as - "just another aggressive, out of control black man"?

I also understand social media breeds a lot of tough guys flexing their twitter muscles behind a screen. Saying things without accountability and making statements to rile the masses up is as big an epidemic as it has ever been. Yet, even including that outlier, doesn't it bother anyone that these statements, these names, and these words are still as easy to say and type as ever before?

Maybe those feelings among many in America never truly left. Never truly evolved. Why else would it be so easy to throw around?

Sherman's interview should have been just an epic moment for us to discuss on Twitter, to poke fun of through the media, and to look back on. A moment up there with Rasheed Wallace's passive aggressiveness, Bart Scott's epic tirade, and the many Muhammad Ali glorious trash talking statements. Instead, we've turned it into an issue of racism while ultimately exposing that America still has a long way to go in how we view each other, how we view certain situations, and most importantly, the sad inner conscious root of our initial impulse to social occurrences.