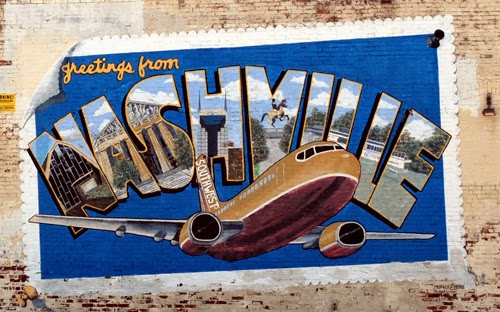 Last year, the good Lord showed his humor in having me return to Las Vegas for the NIRSA conference. As you could read here, the return was quite comical for several ironic reasons in my life. Nonetheless, another NIRSA conference brought about another trip, this time to Nashville, Tennessee. A city in which I've never been to, and one that I honestly would never ever have imagined I would thoroughly enjoy the way I did.

My trip lasted three days, in which I left on April 23rd and returned on April 26th. Who knew after three days in Nashville, it would become one of my favorite cities in the United States. And yes, personally, I would rank it over Las Vegas (say what?!!!).


My trip began with a mad rush to make my flight. You just gotta' love getting up at the crack of dawn to catch a flight, right? So how about adding in these factors - (1) Getting in from work the night before at 12:30am and eventually getting to bed at 2:00am (waking up at 5:30am); (2) Having the private car that was supposed to pick you up call and basically say, "we screwed up, we have no car for you"; and (3) Calling your father who is sick, having him pick you up, then take the wheel to pretty much race through morning rush hour in New York City to make a flight.

Yes folks, I had my "Home Alone" moment as I sped to the airport, checked in, ran through the halls to the security checkpoint, and made it just in time as the flight began to board. No joke. Just. In. Time. Never been that late for a flight ever. And I'm hoping to never be that late ever again. Not that it was my fault, but whatever.

If that wasn't a weird experience, how about this one I had when checking in for the conference in Nashville. I approached the desk to which a very attractive mid-twenties woman working did her shpeel:

Woman: Hi, welcome! Can I get your last name please?

I gave her my last name and then it got really weird.

Me: Really? Spelled the same way? It's not a common name.

Woman: Yup! Same way. Where are your from?

Me: Born and raised in Brooklyn, NY.

Woman: Oh wow! Me too! Well not raised. I was born there. Moved to Arizona with my parents when I was two.

Me: Oh cool. Not a bad place to leave Brooklyn for. Is your mother from Brooklyn?

Woman: Yeah. I love it in Scottsdale. Actually, my mother is from Portugal.

Me: Really?! My grandfather is Portuguese.

Me: [mind blown at this point] Yeah, that's ummm, so weird.

Woman: Yeah...[followed by an awkward and confused smile]

Random guy behind me from Georgia Southern University: I think you guys are related! That's so cool!

Unfortunately, she had to continue on with the long line behind me. At least that was my thinking, mixed with complete mind-blowness, for lack of a real word. I'm sure she might have been a bit freaked out by our conversation as well. Though, now removed from the moment, I am highly intrigued by our possible connection.

Nonetheless, Nashville, is a really nice city if you remove those awkward "possible family" encounters. Clean (every city is clean to me coming from NYC), friendly (have to love that southern comfort of greeting everyone with "Hi y'all!"), and yes, there is live music everywhere! Seriously, everywhere. There was only one establishment that I came upon in three days of perusing downtown Nashville that did not have live music. One. Even the place we ate at in the airport had a guy strumming the guitar.

Of course, the live music wasn't the hit-or-miss type you hear here in New York's Subways, but it was all good. All of it was bearable. As a fan of music, it was nice to enjoy great live music everywhere. From old rock, hip hop covers in acoustic form (Sounds weird, but wasn't at all), and of course, country music, it was all pretty good stuff.

To be honest, I spent several hours one night in a bar that had a patio outside, just listening to country music, watching hockey, and chatting with my colleagues. And it was a lot of fun. Trust me, I know what I just wrote. Yes. Beer. Country music. And Hockey. And I'm from Brooklyn. Brooklyn, New York that is.

I also realized Hockey ain't all that bad. Whooooaa!! what?!! More on that in a post soon to come.

I stayed at the Gaylord Opryland Resort, which if you take a moment to check it out, you would learn how big massive ginormous humongous this place is. It is easily one of the biggest places I've ever been to. It took me on average about 10 minutes to walk from my room to the conference sessions, and 15 minutes to the lobby of the entire compound. Massive, but a wonderful place.

As for the food, Nashville is tremendous. BBQ galore. We hit so many of the popular places such as the famous "Jacks BBQ" on Broadway in downtown Nashville. All of them were really good. Food is a major plus in Nashville. But be warned, you're bound to put on weight. And my clothes actually smelled like BBQ smoke from one establishment. It's that type of deal. True BBQ. Awesome stuff.

Also, for the single fellas, let me just say, Nashville is very easy on the eyes when it comes to the ladies. It's a city with lots of options, as the Southern Belles are true to the stereotype - though some seem pretty high maintenance. But still, it's pretty evident how much sunshine and good weather helps.

All in all, I was surprised in how much I liked Nashville. Not a huge city (after all, nothing is compared to NYC), but there is a certain charm, character, and soul that makes it distinct and unique. I really, really enjoyed it.

Who knew this kid from Brooklyn, NY would really enjoy Nashville, Tennessee?