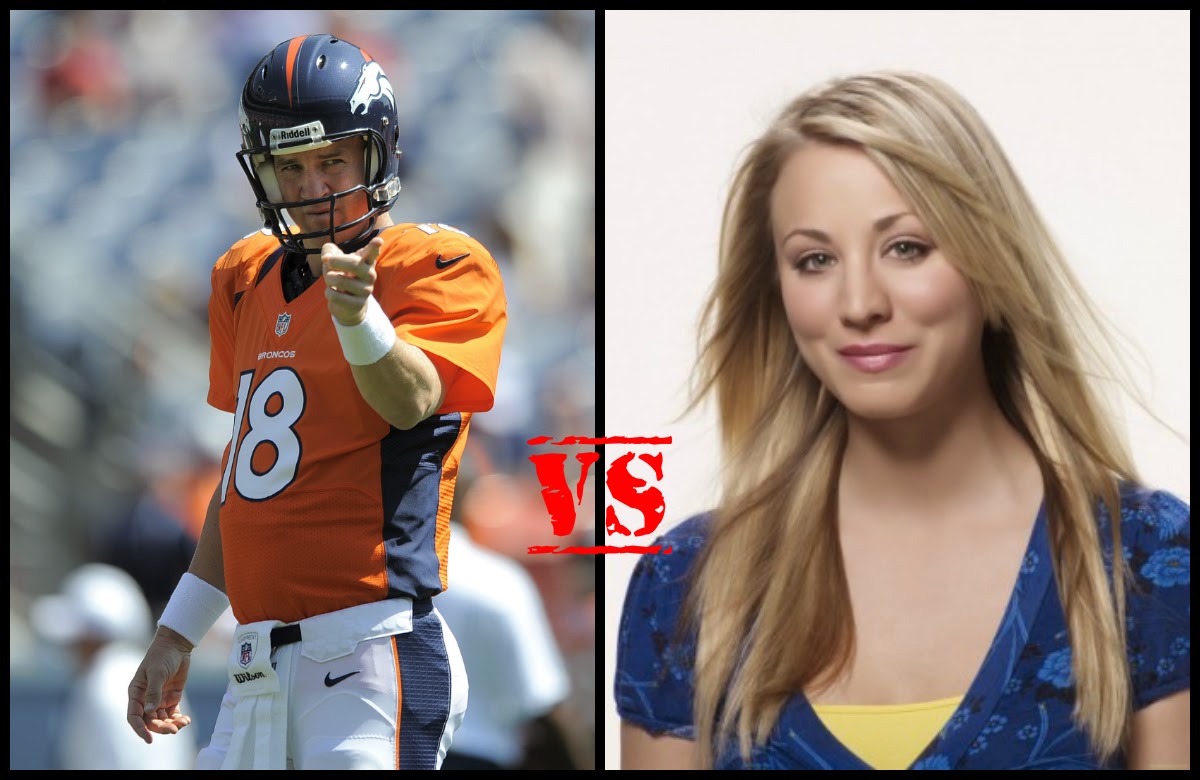 1. Better Jeopardy Contestant - Ouch. I hate how easy this is. So much so that I feel bad. Peyton Manning, one of the smartest, most methodical and cerebral athletes in our lifetime, or Penny, who works at the Cheesecake factory and dropped out of community college? Umm, yeaaaaaah. (Manning 1-0)

2. Incognito on City Subway - This is actually another easy one. The guy that is all over your screen for Papa Johns and Buick commercials, or the random lady wearing a cheesecake factory uniform with uggs? One of those things aren't like the others on a typical city subway rush-hour commute. (Tie 1-1)

3. Least Likely to be Caught for PEDs - I know what you're thinking, Penny has this wrapped up, right? After all, she's just a waitress, and Peyton plays a professional sport. Well, look at it this way, Peyton Manning never does anything wrong. In fact, his body barely has any resemblance to a PED user. And Penny, well, PED users are always the ones who are the most desperate to either "make the big-time", hang onto their spot, or eager to keep up with their competition. And my guess is, she would get caught. (Manning Wins 2-1) 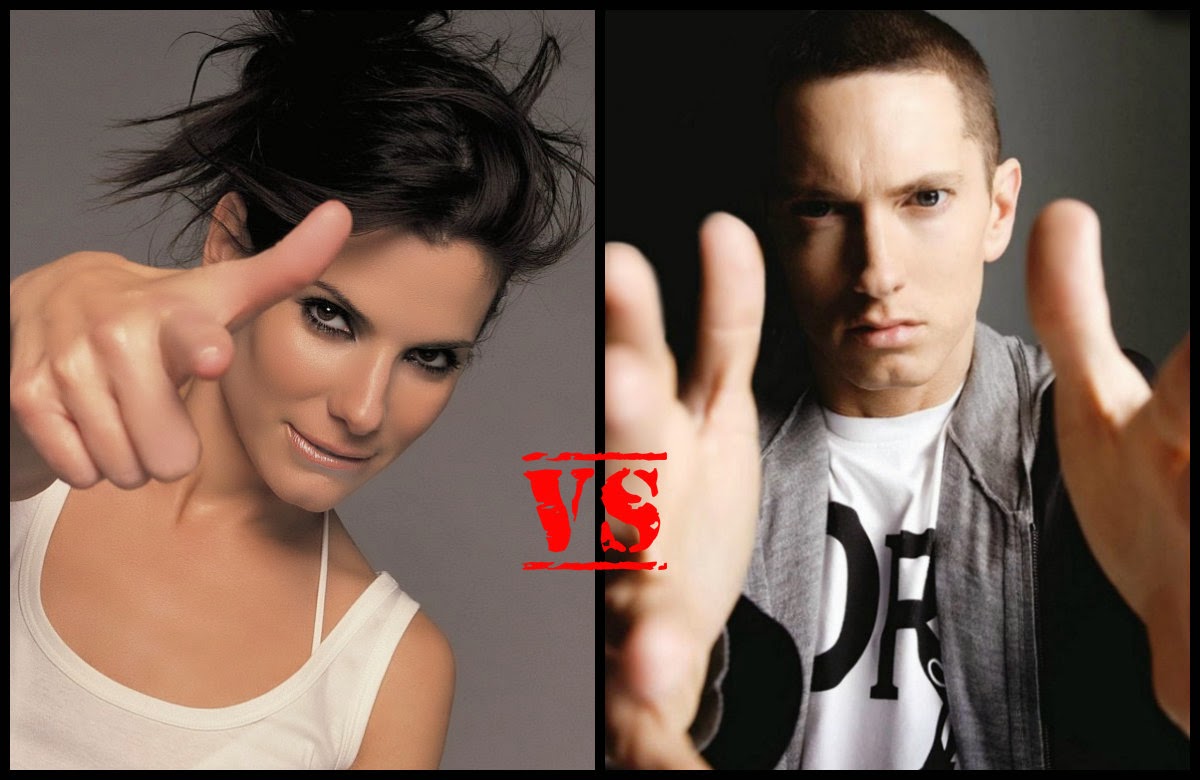 1. Better Jeopardy Contestant - I'm sorry, for the life of me, I cannot picture Eminem on Jeopardy. I just can't. And if he was, he probably wouldn't care enough about it. Sandra Bullock is usually all-class, and  would probably at least make for a good celebrity-appearance. (Bullock 1-0)

2. Incognito on City Subway - Sandra Bullock is exactly the type of celebrity tabloids are in search of as they do, well, whatever it is they do to find them. Plus, the thing I've always loved about Eminem is that even as a millionaire, he still rocks jeans, a t-shirt, and a hoodie. Nothing fancy. Throw the hoodie over his head, sit on the train, bob your head to what is bumping in your head phones, and boom, he's your average guy. (Tie 1-1)

3. Least Likely to be Caught for PEDs - This is tough. Really tough. Both seem to be confident enough in their own abilities that PEDs wouldn't be a factor. Unfortunately, the deciding factor has to be Eminem's previous drug history, which would place some iffy thoughts about his proponent to experiment. Sandra gets the nod on a controversial call here. (Bullock wins 2-1) 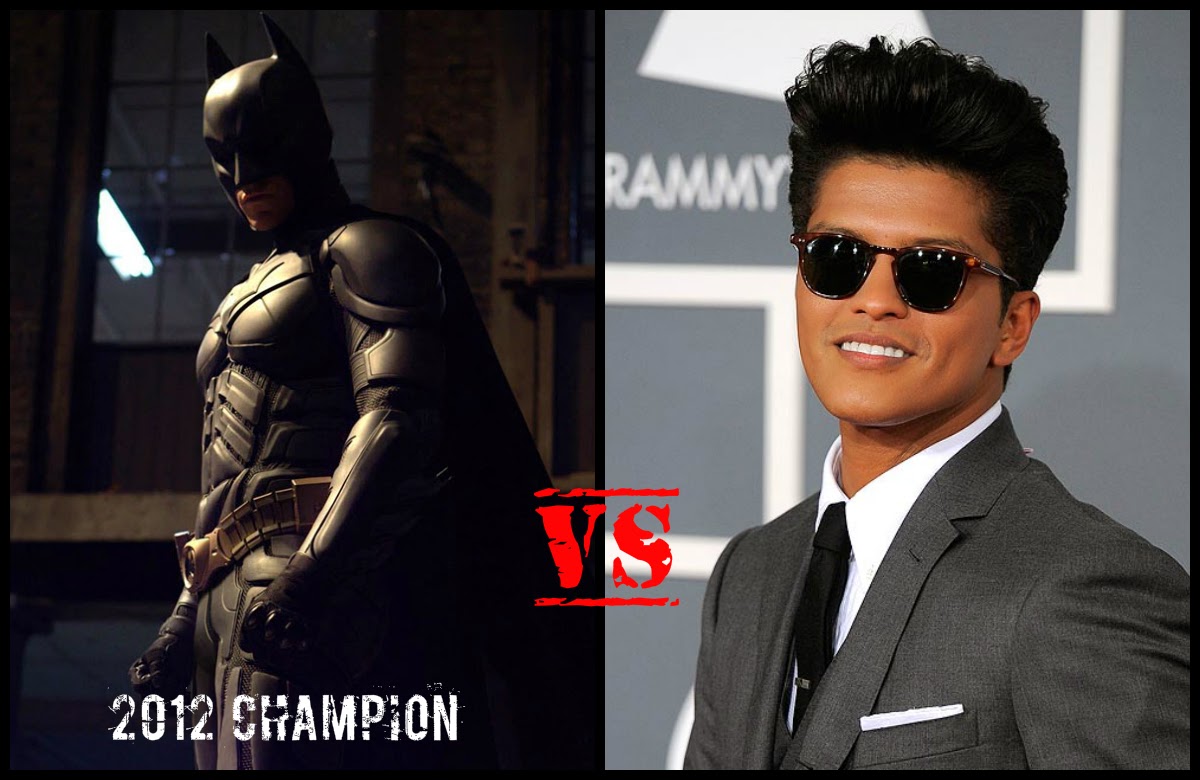 1. Better Contestant on Jeopardy - Batman isn't the biggest communicator. Especially, the darker version we've experienced lately. Bruno Mars would make for an interesting contestant. However, I would absolutely love it to hear Batman say one time, just one time, to Alex Trebek, "Why so serious?". That's all he needs to do. That would make for the greatest of great moments in the history of Jeopardy. And because of that, he would make for the better contestant because of that simple prospectus. (Batman 1-0)

3. Least Likely to be Caught for PED's  - Bruno Mars on PEDs is weird. Although, who knows what he does to pull of the moves he does. While Batman needs the strength, who is drug testing Batman? And who does he hangout with for these kind of sources to be leaked. Alfred? Plus, no one cares if Batman is clean or not, as long as Gotham City remains safe. (Batman wins 2-1) 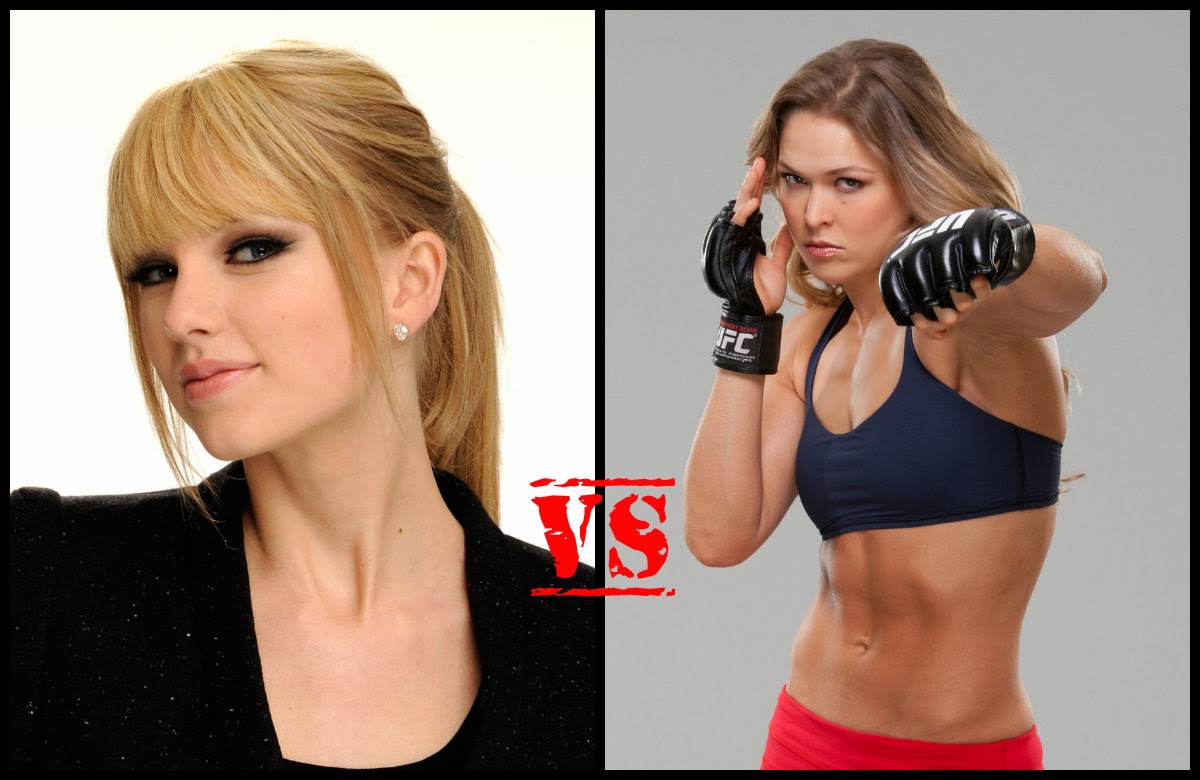 1. Better Contestant on Jeopardy - Ronda Rousey doesn't exactly scream intellect as much as "bad-ass", but here is why she wins this. For the mere fact the cameras will show Taylor's reaction to all of the answers said on the show, regardless if she is answering. You know, the way they do on every single awards show she attends. That would be annoying. No thanks. (Rousey 1-0).

2. Incognito in City Subway - Taylor is world renowned. Good luck trying to hide her in the Subway. Rousey is only recognizable to those who are into mixed martial arts, and even then, she probably can get all dolled up and no fan would recognize her. Yet, another 7-seed defeats a number two in this tournament. (Rousey Wins 2-0)