Another Extreme Weekend: DP Notes From Living Through Sandy 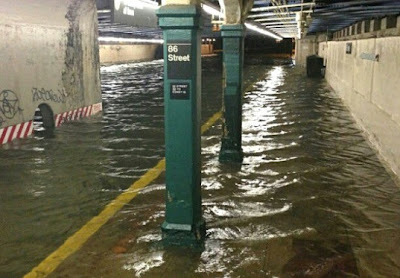 Similar to what I did last year with Hurricane Irene (Part 1 Part 2 and Part 3), I took some notes or at least punched the keys recording a few words during my time experiencing this hurricane that I can at least look back on in the future, or possibly help shed some light to someone outside of this devastation. The following are what I composed over the last three days.

After Hurricane Irene, the thought that another hurricane is making it's way through the tri-state area one year later is mind-blowing. Many years ago, the city wasn't exactly shut down, but schools were closed for a hurricane which quickly downgraded to nothing more than a really bad thunderstorm once it hit the city. Then last year Irene decided to visit one weekend and caused a bit more damage, but not close to what was hyped and expected.

From all of the television news coverage, tweets, and hearsay, Sandy is projected to be legit. And while we cannot assume it will be the disappointment that Irene was, I can only hope it turns out to be just that. However, with the the MTA completely shut down and pretty much the entire city putting a pause on New York City life, this seems more than just a scare. The winds and rain have already begun to whip up, and my fear is beginning to grow from hope to a fearful reality.

This is going to be bad. Really bad.

Sandy may have a sweet, innocent, all-american name, but she is as nasty, ruthless, and as anti-anything-but-herself as her name projects. Sandy has brought howling winds and rain that not only is insanely frightening, but very concerning. My building is shaking. Shaking! This fact has been made utterly clear, Sandy is not Irene.

As I sit here in an apartment with flickering lights and power that seems to be fighting from giving in to Sandy's devastating hands, the news coverage and Twitter feeds are filled of stories of death; floods through out the city, tunnels, subways, and streets; trees collapsing all over onto homes and cars; stranded people in homes; power outages; transformers exploding; Several construction cranes hanging on for dear life, and threatening to crash to the ground from sixty-plus stories; plenty of cars being under water; and unfortunately, loss of life.

As of right now, all of the bridges are closed, tunnels flooded, and the subway systems still down.  Sandy is downgrading as she continues inland, but is still powerful enough to cause havoc, and seems to be planning on sticking around until late Tuesday evening before finally showing us mercy.

Like everyone else, I've spent the entire day on my couch blogging, watching movies, and hoping for safety for all of my friends and family, for my building to sustain structural integrity and security (Our windows have heldup unlike during Hurricane Irene), for the power to continue it's battle to stay alive, and for my car, which is in the garage under my building - hopefully not flooded.

A friend of mine texted me and sent her wishes hoping the tag partner and I were OK as she watched the coverage from afar. "It looks like a horror movie" she said. And from looking out of my windows in my seventh floor apartment here in Brooklyn, I can assure you it's downright frightening and very, very horrifying.

Looking forward to Sandy's departure tomorrow so the damage assessment and recovery can begin.

I hate you Sandy.


The aftermath. After being couped up in this apartment for so long and watching the horrible images of devastation done to the city I love so much, I wanted to get out of my apartment. I needed to get out not just for my sanity, but for my burning curiosity and worry. I headed over to my parents first to find their house in one piece with no major damage. They only suffered a bit of a power outage the way we all did. Their house is part of a row of brick houses which helps in events like this. Unfortunately, others weren't so fortunate throughout the tri-state area.

Shortly afterwards, I headed over to the Canrsie section of Brooklyn where I grew up. From my experience living there of having flooded basements just from heavy rainfalls and the fact the area is right on the water, I knew it would be bad. Also, from Facebook pictures and other images floating around on Twitter and the local news, it was indeed bad. A friend of mine called me last night to tell me that his car was under water, and he had to head next door to help his neighbor and her baby in the midst of the storm with flooding up to his waist in his driveway. Unreal.

I decided to make my way over to Canarsie and what I found was what I expected and so much more. Traffic lights outages. Trees laying all over roads and on top of cars. Power and cable lines down. Downed telephone poles disrupting the usual routes. Cars damaged from flooding. Seaweed and other water life in the middle of streets from the overflow. And everyone outside either examining the damages to their homes and wondering where to start, or simply immediately running pumps out of their homes into the street trying to drain their homes of water.

I got to my friend's block and the images continued, especially since he lives right off a creek. They explained various stories that just continued the madness. Floating cars during the storm. Damaged cars. Out of control power lines with sparking ends that you hoped and prayed didn't hit your home. Having to move to the second floor of your home since the first level was completely flooded and watching that water creep up the steps leaving you to wonder, what's next?

They informed me of one of my parent's friends who happens to live on the same block, and the fact that her tenant remained in her apartment during the floods and had water in her apartment up to her neck. 911 was called, and rescue teams literally used a raft down the street to the home, where a rescue worker went into the home as if he jump into the Atlantic Ocean.

I'm sure everyone has similar stories to this, to go along with the continuing viewing of graphic images across our city. However, as we assess damage, in my opinion, no area is as bad in this city as Breezy Point, Queens, where the entire neighborhood was flooded before eventually burning down (See header picture). What happened in that community where families have lost homes, cars, and everything is truly tragic and heartbreaking.

There is no amount of words, sentences, or posts I can write here than can capture the damage done to this city, and how long the road to recovery looks to be. From the worse condition the subway system has been in its 108 year history, to bridges and tunnels being closed, to the inability to get businesses up and running, we have completely been brought to our knees.

Sandy has definitely put a lot of things in perspective during these three days. The importance of life, the pointless things we worry about on a daily basis, and for me and the tag partner, when we lost power tonight, the raw power of relationship without phones, touchscreens, and other technology.

And it also puts into perspective how truly blessed we are.

As one of my friend's mother said to me, "this really puts into perspective what the people of New Orleans suffered with Katrina".

These past few days from, the preparation for Sandy, the unknowns it was going to bring along with the hype surrounding it, to witnessing it and living it, to now trying to make sense of the aftermath, has all been mentally exhausting.

I'll be very honest, I struggle with attempting to realize and wrapping my mind around how this falls into the plans of our God. Is it something we did? Something we deserve? Or even, as hard as it is to imagine right now, part of a larger picture?

Nonetheless, as of right now I do know that I love this city. I love this city dearly. And just as we've bounced back from 9/11, catastrophic power blackouts in 2003, and Irene just last year, we'll do so again with Sandy.

I hate you Sandy.