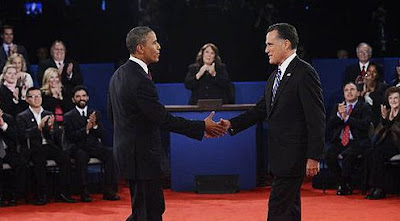 And we're back at it! The President and his opponent for the 2012 bid were back in full swing at Hofstra University for the second of their three debates. The second debate shifted to the town hall format of fielding questions from an audience, and one which places the candidate outside the confines (and comfort) of a podium.

As a viewer, the second debate was much more informative as we were able to hear the candidates opinions, plans, and even witness some of their short comings. We saw Romney incorrectly accuse the President of not calling the attack on Libya an act of terrorism, and we also saw President Obama evade a few questions.

However, as a debate geek, the current format forced the issued for the candidates, but at the same time created an invasive, machismo culture that created some moments of sheer disregard for your opponent, and for the rules of engagement in formal debate.

With that said, here are the things we can take away from the second Presidential 2012 Debate:


Ethos, Ethos, Ethos, and a Little Emotion Sprinkled On Top - We have come to notice that Governor Romney loves dishing the ethos before any and all of his responses. Either he spoke with a mother who is struggling, or he has spoken with some small business owner somewhere in - pick a random state - Romney wants to make sure he gets across the point that he does care, and he is in touch with the common person. A stigma he has been battling this entire election. More on that to come.

Aggressiveness - Both men brought a punch tonight that was not seen in the first debate, especially for President Obama. The President was sure to attack Romney and clearly outline and declare the difference between his policies and Romney's. From the national deficit, education, immigration, and international affairs, both sides became a bit more bold in laying the gauntlet down on where they stand.

However, yes, from time to time we still get the typical, "that's not true", lack of explaining their policies, or flat out ignoring of the question.

Binders Full of Women - Do we even need to delve into this? The comment was arrogant, and was very disingenuous in relation to the question. The response did more damage than if Romney gave a simple stock-prepared answer.

Romney is Real - After attacking an ill-prepared President Obama in the first debate, Romney seemed a bit rattled by some of the President's aggressive rhetoric, and was off in many of his responses. However, in answering the the final question of the night, which was a really, really good one in asking the candidates to debunk any current reputations of themselves that isn't true, Romney seemed to answer passionately and most importantly, very freely. He didn't retreat to a stock answer, but spoke openly about his love for the country, his faith, and his passion for helping others. It was by far the best response for Romney on the night. If only he can find that correct blend of using his prepared answers/information and talking candidly to the American people.

Obama Comeback - As stated above, this debate also marked the comeback for the President from a disappointing opening debate. His aggressive nature as well as finally using the golden weapon of the "47 percent" video helped push Romney in uncomfortable positions all night.

Where is the Respect? - Finally, it is apparent both men have no respect for the response time, or for one another's responses. From Romney continually looking to get the last word on every question, to President Obama continually interrupting Romney, and both blatantly ignoring the two-minute time limit response, it makes both look childish, disrespectful, and arrogant, and ultimately hurts the presentation for what it truly should be meant for, to help the American people decide.