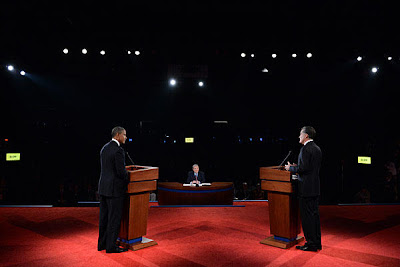 The first leg of the presidential debates came and went, and honestly, it left me wanting more from both candidates. As a former College debater, a lover of the art form, and a total geek for political debates, last tonight's debates left me completely underwhelmed and disappointed.

From the ridiculously phrased questions (You have two minutes to explain why you are different? How does that force debate, or facts?), the poor moderation of the panel, the insanely lack of respect for the code of a timed debate, and the overall poor structure, this debate was a complete and utter disaster.

With such a poor structure, we received poorly structured arguments, tons of fluff because of the lack of the time limit, and constant pitter-patter that made both candidates look like children instead of the intelligent officials that they are.


1. Romney Can Hold His Own - It's well documented about Romney's struggles connecting with the American people leading up to this debate (Romney Lacks Connection With Nation). He has even done damage to himself. However, tonight he managed to let the facts fly, and he did a great job in presenting all of them in an offensive manner. His attack on "Obamacare" and the attack at the President for putting the bill before jobs was a great line and a great move. There was a certain passion exuding from Romney that I haven't seen yet.

2. President Obama Wheels Are Spinning - Besides the fact I kept getting annoyed at Obama for breaking every rule taught on debating and your stance at the podium (much of it imbedded from my Debate coach in college) as he rocked, leaned, and constantly looked over to at his coach, the President was really flat. That's only way to put it. He just seemed off of his game and lacked any substance or punch in any of his arguments.

Did anyone else notice he barely looked at Romney, whereas Romney seemed to have embraced the challenge head-on by looking him head on while delivering answers?

Body language and posture sometimes say more than words in a debate.

Where was the classic, charismatic, fiery, energetic guy we all know?

That guy didn't show up, and it was evident as Obama circled on the same arguments of what he was looking to do, rambled on with unfocused answers, and never truly made arguments that placed Romney on the ropes.

3. Romney Still Struggles Vocabulary - The whole night Romney made blunders that simply would turn on-the-fence voters against him. Constantly, while watching the debate, the tag-team partner and I would look at each other and say, "did he really just say that?"

The constant use of "my state" instead of Massachusetts. The use of "they" and "them" when referring to the middle class instead of "us" as a nation. The use of the word "poor" several times when discussing lower-income children. He even caught himself once on this one, and tried to correct it.

It's not worth not voting for him, however, if Romney wants to shake loose the reputation of being disconnected and actually caring for the middle and lower class, he needs to use words that won't alienate these demographics.

4. Obama Missed Opportunities - This sort of rides of off Obama's flat performance, but the President also missed opportunities to really hit Romney with questions that the nation are clearly waiting for. We all know Romney/Ryan have made claims to what they are going to do, but have yet to actually explain it. President Obama did a good job of mentioning that his economic plan to cut the deficit was on the government website, but instead of shifitng the argument over to really lay Romney out to dry on national TV, President Obama continued to push his plan.

And hello, how about the "47%" comment? That's a gold mine weapon that Obama could have used, and still can in the upcoming debates. Let's hope he doesn't forget it.