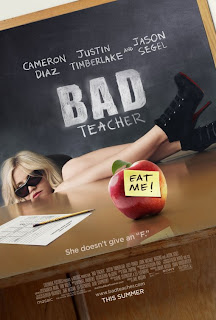 After a woman's goldigging ways are revealed and her engagement is broken off, a junior high school teacher returns to teaching to kill time until she is able to catch the next sugar daddy.

While in the car smoking marijuana, one of Ms. Halsey's students walks up and catches her in the act. Halsey then addresses the acts as medicinal, and has some choice words for the girl.

I understand that Bad Teacher is supposed to be a comedy, unfortunately, the film leaves a lot to be desired in that category.

First the positives: Bad Teacher has an interesting concept behind it, and has a plot that can be developed into an interesting film if done correctly. Also, Cameron Diaz does a great job as Elizabeth Halsey, the foul-mouthed, no ambition, goldigger. And the rest of the cast was stocked with incredible potential. The talent was there to do so much more.

However, Bad Teacher is a bad movie. It's run at comedy fell flat several times, and it's use of Jason Segel, arguably the film's most interesting actor, was pathetic and pointless. The plot is filled with random occurrences happening to move the plot along. A plot that seemed all over the place in direction, and confused in so many ways. This was combined with poorly defined characters.

Ultimately, Bad Teacher attempted to turn a foul mouthed, no ambition, scheming against the best teacher in the school, and law breaking character into the protagonist of the story. Hard to do so, and it pretty much sets up the downfall that is Bad Teacher.