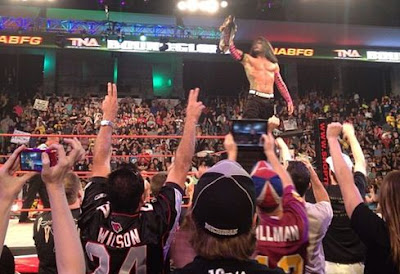 Since changing the creative staff and the overall long-term planning of the company, TNA's rebuilding of it's brand has been progressive, and has been truly entertaining. From the switch back to it's roots of a more traditional, wrestling-focused brand, to the new concepts such as "Gut Check" and new production elements, the product has been the best in the pro wrestling industry over the past six months. Something that is quite the 180 from the last time we reviewed the company's biggest show of the year (Bound For Glory is Bound by the Past).


From last year to this year, the company has shifted from a reliance on wrestling's past, and is now forging the future of the company with youth and a blend of veterans. This was noticed in the unbelievable main event between Austin Aries and Jeff Hardy pitting the hottest wrestler in the industry against the worldy-popular and comeback story of Jeff Hardy. A main event which was off the charts and truly delivered. A match that capped of a redemption story for Jeff Hardy who as you know hit rock bottom last year (An Emphatic, What is this? Victory Road a Dead End), cleaned up his life, and has made the ultimate comeback after making the best of his last opportunity in the business.

Bound For Glory also was the stage for a bloody brawl, and the eventual show-stealer in Bobby Roode vs. James Storm. Another match that was one year in the making that was physical, hard-hitting, entertaining, and downright bloody.

The rest of the card also delivered and gave BFG 2012 a card that was highly entertaining from top to bottom. There were also surprises and reveals with the progression of Aces and Eights and the reveal of Devon being linked to the group.

With the great show that was put on in Phoenix, Arizona by TNA, the confirmation was given that the company is headed in the right direction with their current homegrown stars, a methodical build of their wrestlers, and business model stated by executive producer, Eric Bischoff, that great stories, plus relative characters, plus a real crowd (yes, a knock on the spoiled crowd at the Impact Zone), equals a great show.

The time is nearing for the company to begin taking the Impact Wrestling brand on the road as the next step in 2013. Bound For Glory 2012, arguably their best among their biggest show of the year, could be the re-start of something special for the company in a major, major way.

Which is exactly what the current creative team had in mind at the beginning of last October.