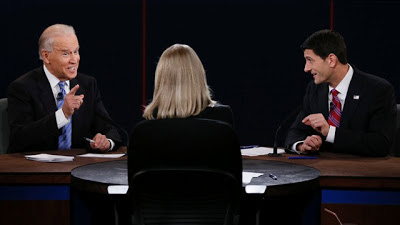 Despite already being a debate geek, I was really anticipating this year's Vice-Presidential Debate for one reason - Joe Biden. I'm not sure what it is about Biden, but the guy has a certain type of charisma that is entertaining. Whether that equates to  actual votes or simply, entertained viewers is another subject. However, Biden has a unique and distinct way of making his points. His choice of words and how he gets his points across are quite the adventure, an aspect opponent Congressman Paul Ryan touched upon that incited laughter among many during the debate. And speaking of Ryan, his intellect and anti-Biden style provided the clash that made the VP debate must see.


After a debate that was well moderated (especially in comparison to the first Presidential Debate), touched on some heavy topics, and exposed a few things on both sides, here are the aspects we can come away with from the Vice-Presidential Debate.

1. Biden Fearless - Biden held nothing back in this debate, and at times, seemed to be debating away from his coaching, and doing so on pure emotion. Biden was loose, confident, and never seemed to be at a lost for a response at any time during the debate.

2. Biden Had Facts and Stories - Part of his fearless approach were the multiple facts Biden had at his disposal. While Ryan had decent rebuttals, Biden's knowledge seemed more first hand experience than coached rhetoric, and made it tough on Ryan to really get an edge. The stories Biden spilled to the nation of Ryan coming to him for help was great ammo, and caused Ryan several times to go to what seemed like an emergency prepared response. Can't blame him.

3. Ryan Seemed Robotic - Ryan is very intelligent. I said it at the top of this post, but he seemed lethargic, and handcuffed on his responses and in his attacks. It felt like he was doing more of a promotion for Romney, than defending or taking a stance on a potential Vice-candidacy.

4. Dwelling on Past - Biden in all honesty won this debate going away. And one of the main reason's was Ryan's inability to answer questions with forward thinking. There were many times Ryan had the chance to really separate himself from the Obama/Biden ticket, and he chose to attack the choices of the group rather than make a statement on how they plan to either solve, or amend the situation. Especially, his responses regarding national security or an exit strategy for U.S. Troops in Afghanistan.

5. GOP Commitment to Not Committing - Ryan dodged everything, and pretty much continued to build the growing reputation the GOP has of not really revealing any plans, but simply tearing down the Dems. At some point, whether it be Tuesday, or next week, Romney/Ryan will have to give the nation substantial plans to fortify their side. Definitely a step back for the republicans after Romney's great performance in the first debate.

6 - Biden's Charisma and Connection - Finally, Biden, in his unique away, albeit it with terrible debating form and etiquette, came across more personable, and of course wasn't shy about his over the top mannerisms. And how can you not like that killer smile?