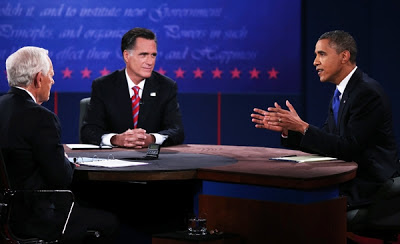 It was the final go around for both candidates before November 6th decides the next four years of our nation's leadership. After splitting the first two debates, with things becoming intense during the second debate, it was very important for both candidates to not only win the rubber match, but also stay calm, respectful, and poised, without losing their aggression. After the arrogance and rudeness displayed in the second debate, not to mention the bickering of inaccuracies and non-factual statements on both sides, it was crucial for both sides to not alienate the audience before going to the polls.

And both sides did just that. This debate was moderated very well, and for the first time during their series of debates, both candidates respected the timed response, and also did not talk over one another. However, in the end, after a few weird agreements, it seemed that President Obama won this debate.

Nonetheless, here are the things we can take away from the final debate.


Obama > Romney of Foreign Affairs - The debate's topics were built around foreign affairs, and as the night went on it was clear that Obama's knowledge far surpassed Romney's when it came to matters overseas. Obama gave reasoning behind each and everyone of the current administration's moves, and Romney struggled to counter. The Governor's point that Russia was the nation's biggest foe made him seem outdated and out of touch, and eventually set the snowball moving in his night of evading such questions.

5 Point Strategy Needs No Math - Romney in various issues regarding international affairs tied the said problem back to his campaign-focused five point plan to help create jobs and grow America's economy. Despite the President's clear and effective rebuttal of explaining Romney's plan of sustain the 5 trillion military budget while increasing it by two trillion without having any cuts, and still being able to close the deficit,  was brilliant. Romney never offered a defense and continued to exhort the five point strategy plan, and directed viewers to his website.

Romney Juking, Jiving and Ducking - When directly asked by the moderator what he planned on cutting if he was going to increase the budget for the military, Romney's response started on the military and delved into education here at home, completely ignoring and evading the question. Just as his time was ending, he came back to the question in a  disingenuous way. Romney has fed the reputation of not being thorough in explaining his plans during these three debates rather than debunking them.

I'm With You Man! - The agreements on several topics simply felt weird. Not unusual for both parties to agree on topics, but it is rare. So when it happens, especially for two men who have had such different fundamental views on almost everything, it was odd during the debate to hear them agree, and do it quite often. However, for every agreement, Romney concedes to the nation that President Obama is indeed on the right track.

Romney Vision For Trade - Governor Romney's plea that the United States currently relies too much on China and has not taken advantage of a budding economic market in Latin America was one of his shining moments in this debate. With his knowledge of business, Romney was able to exploit the biggest weakness facing the current administration, and that was the slow growth of our economy. For Romney to present such innovative ideas, it really helped him show off a true strength of his.

Romney Final Comments - I've been on record during the republican primaries of calling Romney a car salesman in his approach. However, many of his final comments during these debates have been heart felt and really seemed sincere. Whether that's part of his salesman shtick remains to be seen, but whenever Romney moved away from his stock answers during this debate, he has delivered rhetoric that can easily help him gain undecided voters, or even those who are unhappy about the last four years but not entirely in love with him.

The debates have been very interesting, and it is safe to say that President Obama won the series. However, I'm not sure the President did enough to convince those that voted on his basis of hope and change to re-elect him. This should be an interesting couple of weeks down the stretch as we head toward the polls on November 6th.

Be sure to exercise your right and have your voice heard - Vote!