Upside Down Yankees Universe: An Honest Look From a Yankees Fan 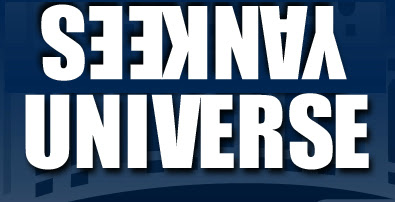 Recently, Detroit Tiger's outfielder Quentin Berry had the following statement regarding the atmosphere at Yankee Stadium, "This is a very easy place to play now. Coming from Oakland where the fans were so rowdy, it's easier to come here."

As a Yankees fan, I have been downright embarrassed by the atmosphere and the actions of other fellow Yankees fans, and yes, you know, those fraudbags that come out this time of the year.

I have been downright embarrassed from the empty seats in the stadium, to the blatant unintelligent remarks and blame being thrown in the direction of A-Rod as if the Yankees struggles are solely on him, and I'm embarrassed by the overall cynicism and entitlement occurring within our fan base - Yankee Universe as it is sometimes called.


Remember when we were the smart town? The town that knew baseball, and the town that didn't just like sports, we knew sports.

Whether those fans moved away, became spoiled or whatever maybe the issue, that is no longer the case.

Today, we have a generation of fans that know nothing but winning, and unfortunately have become spoiled in their view on baseball. Spoiled to the extent where their sudden need for results at all-times clouds their baseball knowledge and their sense of perspective on all things.

We have become fans who complain at every whim during the ebb and flow of a baseball season about a 95 win team that it reeks of the same stench of snobbishness and "young punk" as those kids on an episode of Sweet 16.

What happened to us?

Today's fans show up late to the game, and leave early when the Yanks are still within striking distance.

Today, we have a stadium, that is no longer intimidating, but rather a house full of suits and other celebrities who are there to be seen, and not heard, like they are supposed to. We have a building where "fans" are that is occupied with getting their tray of sushi rather than making noise and creating a Yankee Stadium that opposing teams fear.

And I get it. Sky high prices, luxury boxes, suites, clubs, and other amenities in modern stadiums and facilities have priced out real fans, and have killed the spirit and vibe that made the old house special. And that is totally on ownership for their ridiculous prices. Prices that are beginning to comeback to haunt them. All you have to do is take a look at all of the empty seats during the playoffs, and the decline in attendance this season for the first time  in many years.

And if you want to use the excuse of the acoustics of the new house being different with padded seats and other changes that doesn't make for a loud place, then I'll throw you a bone.

However, Quintin Berry is absolutely correct. Compare the atmosphere of any of the ballparks in the playoffs this year, and Yankee Stadium was probably the least electric.

I've said it before, and I'll say it again, the new Yankee Stadium feels like a huge shopping mall, with a baseball field in the middle. I get the experience is better, egress routes are better, and it is more inviting of an experience for all. And heck, let's call it for what it is, it is more of a revenue driving source than the old place.

[Skip to 2:35 to see one of my favorite Yankee Stadium moments]

You know, what it was like before our fan base became characters of themselves. Before our ownership took their fans for granted.

Whether it be a struggling on-the-field product, empty seats, or an ineffective home-field advantage, the current state of the New York Yankees is highly alarming.

It's all of the above.

And until one gives in, all three will continue to keep Yankees Universe upside down.