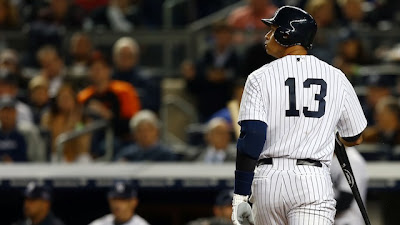 Alex Rodriguez continues to be the most fascinating story and topic I've ever seen covered in pro sports in my lifetime. More complex than steroids, instant replay, the designated hitter, the salary cap, and yes, even Tim Tebow. In a past post (There Should Be More To 'A-Rod' For Alex Rodriguez), I've let it be known how much I believe A-Rod could have been much more than what he is, and has been.

In 2009 we saw what seemed to have been a redemption story for Rodriguez after years of speculation, ridicule, debate, and skepticism. We witnessed the ego, the money, and the fraudness that surrounded him, until the stars aligned in 2009. We saw a new person. A focused player. And a clutch player that buried the criticism of not being clutch and unable to step up when it counted.


In 2009, Alex Rodriguez carried the New York Yankees to a World Series Championship.

He got his ring. He seemed renewed, and he seemed poised to finish his career on the good side of the Yankee faithful. And off the back pages off the newspapers.

The drama around A-Rod seemed over.

That was until October 10th, 2012 where we saw Alex Rodriguez pinch hit for in the 9th inning of a playoff game, with the Yankees down 2-1. That in itself was a gutsy call by manage Joe Girardi.

With criticism growing and those same old critics out for blood with a once again playoff-struggling A-Rod, we got the final blow that shattered the glass on something major in his career - with the Yankees season on the line in a Game 5, he was benched.

Now, as always with A-Rod, there are many sides to this story. Of course much of the media is highlighting his shortcomings and of course, emphasizing the money aspect to make the story that much more attractive. Afterall, who doesn't like a story with an overpaid, underachieving individual?

However, once again, A-Rod is just another scapegoat for an underachieving Yankees offense in the ALDS. In fact, A-Rod had a higher OBP than Nick Swisher and Curtis Granderson in the ALDS against the Orioles, and yet still received much of the brunt for being unable to perform.

Despite being thrown under the bus, the pinch hit situation, and eventually the game five benching marks the realization that the Alex Rodriguez of old is gone. Gone forever. Rodriguez is by no means a terrible player. He's still good, and still better than average defensively at a very tough position.

Of course, the critics won't let you forget the money aspect with the usual, not good for $27M a year!

For the past two years, we've seen the decline of A-Rod, and honestly, he's digressed the way any other aging star not on performance enhancing drugs should. The biggest factor being the inability to stay healthy.

Over the past few years, we've had reaching shimmers of hope that he would eventually return to that elite player with spring training reports of him losing weight, or finally overcoming the hip injury, or getting surgery recommended by Kobe Bryant, or a new tweak in his swing, or something we felt was the missing piece to capture that 2009 postseason A-Rod. Or that 2007 MVP Alex Rodriguez. Anything, to get the once, greatest player in the game, back.

However, the truth is, he isn't coming back. Ever.

That A-Rod is gone. And being pinch hit for and finally being benched proves it.

Whatever your opinion is of him, the glass has been shattered, and it's time for us to readjust our perspective on the man named Alex Rodriguez, and change our expectations for the baseball player, A-Rod.

Be prepared to do so as he still has five more years in pinstripes, and this could get much uglier before it's over.

So much for redemption. But there will always be 2009.

And for those counting, those five years, that's a total $114M still owed to the aging slugger.