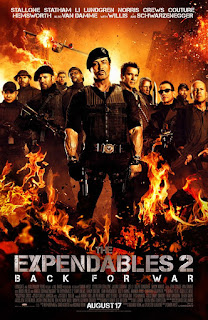 After a mission to settle a previous debt goes awry with the murder of one of their own, the group must now avenge the death of their fallen comrade.

After retrieving the code on the original mission, the group comes face to face with Vilain and his troops, who eventually steal the code and kill Billy.

Barney Ross: [seeing their new plane] That thing belongs in a museum.
Trench: We all do.

After watching the Expendables 2, I'm still not sure what I just saw. There was lots of shooting - lots and lots of shooting and explosions - blood, action, and tons of cheesy lines. However, while those are vital ingredients for a great action movie, the Expendables followed the same lackadaisical writing and development as the first one (Dome Pondering Movie Review: The Expendables -2010) and provided a very underwhelming plot.

For a film on it's second leg, we have absolutely no idea who any of the characters are, and really, what the group does. Are they mercenaries? Are they rogues? What is their purpose? Heck, we barely know their names. Don't be surprised if you end up calling them by their real names.

Also, the action scenes are so over-the-top with constant gun fire to the point where it becomes desensitizing to see someone die. We know in these movies that the good guys win, but at least deliver a plot line of some type of resistance that forces us to get behind the protagonists.

As for the dialogue, the cheap references to the former action movies the stars have been in gets old and cheesy very fast. Either you play the action characters, or a new one for the franchise. The in-between stuff really gets confusing and hurts the product.

All in all, there is so much potential in this series. So many possibilities of making something memorable. Instead, Stallone and his writing crew have settled for cheap nostalgic project with tons of star power and absolutely no depth.

Expendables 2 is better than the first one for sure, but if you saw the original, that's not saying much.

Recommended if you want a good "bad" movie to watch, or you're absolutely intrigued.