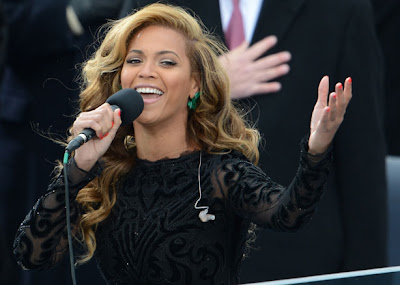 Let's put this Beyonce fiasco to bed. The mere thought that this lip-sync tid-bit has grown from a story to a so called "act-of-disrespect" is ridiculous and borders on insanity. More so, it reveals just how much of a jump-the-gun society we have become with the opportunity for instant attention and cynicism right at our finger tips.

From the print and social media, to television and blogs (now including this one), everyone has an opinion, and unfortunately, the majority are reacting as if Beyonce presented some type of disservice to her country in her performance of the Star Spangled Banner during the President's inauguration. Many have called the act a moment that cheated us all, and some have gone as far as saying it ruined the day.

What makes matters worse is the performance of former American Idol, Kelly Clarkson, in her rendition of "My Country Tis' of thee". After all, if Clarkson can do it, why can't Beyonce, right?

Look, noone has confirmed or denied that Beyonce lip-synched her performance this past Monday. Not even the United States Marine Band who played behind the superstar's voice - recorded or live. And let's say for the sake of argument that she did indeed commit this "grand crime of atrocity" in our nation, so what?

We've seen many performers at many inaugurations before "fake" their performance, including acts such as famed Cellist Yo-Yo Ma going through the motions with his hands in 2009. These things happen all of the time on late-night shows and award shows every night and every year.

I can understand if this was one of her shows in which people paid their hard earned money for, but it wasn't.

And to be honest, in frigid cold weather as well in the midst of terrible acoustics, I don't blame Beyonce. In fact, I applaud her for protecting her wind pipes - her money maker - and for wanting her performance on such a historic day to sound the best it possibly could with all of the varying external negatives.

Either way, whatever you believed took place, you cannot deny it was her voice who sang that beautiful rendition of our national anthem.

And while we're at it, let's throw an Oscar nomination her way, as I, and I'm sure many of you, would have never insinuated the claim if not for the uprising and sudden speculation.

The inauguration was great, and Beyonce's performance was a part of that.

One thing is for sure, Beyonce will use this as motivation for her upcoming Super Bowl halftime performance.

A performance that will also be sure to swing everyone in the extreme direction of an opinion once again.