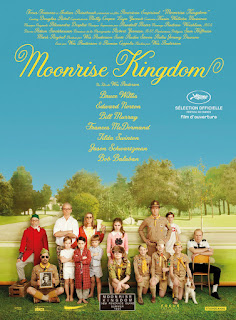 Two twelve year old children who are misunderstood, fall in love, and run away into the wilderness which causes a mixed party to search for them.

After several letters hashing out there plan, Sam and Suzy finally meet in the meadow, where they begin to embark on their journey to setting up camp.

Sam: [to Suzy] Are you de-pressed?
---
Walt Bishop: Our daughter's been abducted by one of these beige lunatics!
---


Sam: What happened to your hand?
Suzy: I got hit in the mirror.
Sam: Really? How did that happen?
Suzy: I lost my temper at myself.
---
Sam: [in letter] Dear Suzy, I accidentally built a fire while I was sleepwalking. I have no memory of this, but my foster parents think I am lying.

Moonrise Kingdom is one of those movies that really should have more awareness that it actually does. It's another of the Sundance films (A Sundance winner as well) that really could make a case for a quality box-office film. It's very funny, very quirky, and offers a really nice story of two characters.

With talents such as Bruce Willis, Bill Murray, and Ed Norton, one would think they would carry the film. However, it's the work of Jared Gilman and Kara Hayward that really does the heavy lifting. Both bring their characters to a point of really forcing the viewer to see them for their flawed characters, but adopt them for the love that they share. At the end of the film, the two characters really do grow on you.

However, the one complaint that really hurts Moonrise Kingdom is that it feels like it never gets to that next gear. While the plot is presented, and the characters are developed, the film really feels like it fails to offer more that it really teases, or really could have brought to the table.

Because of this, Moonrise Kingdom is an interesting film. Really well-done, but one that, for this viewer at least, just really stalled mid-to-late in the movie.

Overall, a very interesting film that is definitely worth seeing.