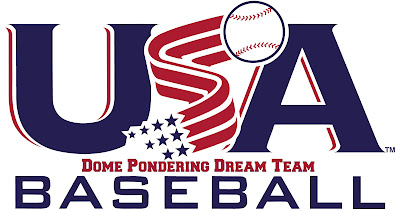 I love the World Baseball Classic. I loved the idea of it since the Olympics unceremoniously booted baseball as a sport from it's events. I was a big fan of the inaugural tournament, the second one in 2009, and I am very much looking forward to this year's tournament. I know there are cynics who are against it, claiming it is made-up, doesn't mean anything, and is a big risk to players. However, at some point, the World Cup was in it's early years? And ask the Cubans, Japanese, or even the players who choose to represent their country if it means anything? And as for as the big risk? Players can get hurt doing anything (Baseball Bizarre Injuries), and most who have participated in the past claim to have been better prepared for the season.

[sideblog: How about Shane Victorino calling Team USA Baseball last year, and then again this year, eagerly wanting to be part of the team again? I like hearing stories like that.]


As a fan, like I wrote before, I love the WBC for several reasons (High Five For World Baseball Classic). Ultimately, it's more baseball, period. I refuse to be one of those cynics that complain about the game's season being too long. I. Want. More. Baseball.

Anyhow, with that said, one of the reason's I'm excited for this year's WBC is because of the United States' opportunity for redemption. After Japan won the first two tournaments along with heartbreaking results for the US in 2006 and 2009, it's time for the U.S. to bring home the Gold in 2013. With Joe Torre at the helm, USA Baseball has begun taking this mission seriously similar to what Jerry Colangelo and USA Basketball began doing - preparing to reclaim their throne as best nation in the world at the sport.


With that said, several names have already been confirm for Team USA:

The complete roster will be announced this Thursday, January 10th, 2013.

It is not a bad list so far. Actually, I'm pretty excited about the team. However, as we all do, I ponder about what my WBC USA team would be. And while it would be slightly different, I think it would be just as good.

Hypothetically, if I had a chance to put together team USA, of course under the presumption that everyone accepts the invitation, I would go with a team of a few veterans,  a handful of superstars, with a sprinkle of  the game's up-and-coming faces. And of course, as we've seen with these tournaments, a super strong bullpen.

And yes, personality and character counts. A group that plays for one another, wins together.

In my eyes, Team USA has the opportunity to do something special for the game of baseball by introducing and solidifying the game's big names, and provide some self-produced marketing for the tournament and the game worldwide. Not to the extent of what the real 92' Dream Team did for Basketball globally back in 1992, but maybe a portion of that influence.

Well, with that said, without further adieu, here is my 28-man WBC USA Dream Team:

Starting Pitchers
I would have taken Justin Verlander, however, I fear someone that relies on so much power like he does at this point of the season wouldn't have his best stuff. Plus I like the overall craftiness of this bunch.

Relief Pitchers
Obviously, I went with a lot of swing-and-miss guys. I would feel very comfortable about a Robertson-Johnson-Kimbrel trio in the 7th, 8th, and 9th, respectively. Also, with Chris Sale, allows for added insurance for starters, along with Mike Adams and Sean Marshall to help bridge the gap on short outings.

Catchers
I believe Joe Torre plans on carrying three catchers, and I highly agree with him. I would too. Especially when all three catchers can play a little first base, and in the case of Mauer, right field, if needed.

I really think it would be cool to have Trout and Harper on the same team playing for Team USA. It would further develop the weird link the two will forever have during their careers. And oh yeah, they're pretty darn good too.

And of course, this would be my opening lineup for the first game against Mexico at Chase Field in Phoenix, Arizona on March 8th:

My only worry? This team might be a bit too stacked with right handed hitting. However, Mauer, Weiters, Phillips and Harper should give a manager some options to work with off the bench, and throughout the tournament, depending on who the opposing pitcher is.

And as for a manager, I guess I can stick with Joe Torre. After all, Scott Proctor isn't on the roster for him to overuse, and yes, this tournament has rules and hard pitch counts for pitchers.

Well there it is, the 2013  Dome Pondering WBC USA Dream Team. Wow, that's a mouthful.