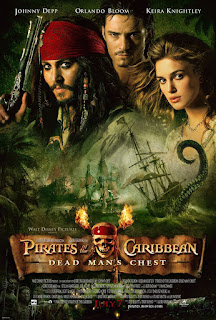 After reclaiming the black pearl, Jack Sparrow must now capture and kill the heart of Davy Jones to avoid enslaving his soul to while others seek the heart for their own agendas.

After digging up the chest on a remote island, Will Turner, the Commodore, and Jack Sparrow begin a three-way sword fight for the key to the chest which then sparks a series of events in an all out battle for the heart.

Jack Sparrow: [to Elizabeth] One word love: curiosity. You long for freedom. You long to do what you want to do because you want it. To act on selfish impulse. You want to see what it's like. One day you won't be able to resist.

I really am terribly late on what is a terrific franchise. After the first film, the bar was set high for a second installment, and is the case with most sequels, it is tough to match, recreate, or surpass the original. However, POTC2 definitely offered the exception to this standard with an awesome sequel that was better than the original.

As always, Depp, Bloom, Knightley, and the rest of the crew are terrific in their roles. Actually, really, really terrific. However, what makes the film better than the original is the very interesting plot for Davey Jones' heart and the demand it has from multiple characters, as well as the awe-inspiring stunts and special effects. Such scenes include the three men fighting within a rolling windmill and the super-impressive dragon/octopus monster that destroyed the Black Pearl.

All in all, another epic film from Disney and this series. And another slam of my head on my coffee table as I wonder, what took me so long to watch this series?