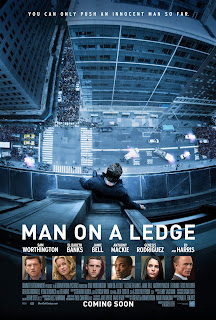 An escaped convict is motivated to take down the people who set up him and to really steal the diamond he was accused of taking, all while proving his innocence to the world.

While attempting to get into the room with the vault, the officials are alerted of a possible theft and headed towards the location as Joey and Angie attempt to clean up without setting off the heat sensor and getting caught on camera, and doing so before being caught.

Man on a Ledge reminds me of a cross between John Q and Phone Booth. The plot which surrounds a man perched and threatening to kill himself, yet, a heroic standoff is taking place in front of the public making Nick Cassidy living martyr.

This film is downright intriguing and action filled as it picks up, is filled with suspense, contains constant guessing on who is good or in on the plot, and keeps you on the edge for what's to come. Sounds typical, and Man on the Ledge might just be typical, but it is very entertainment, and a quick qay to get through an hour and forty minutes.

I wasn't really blown away by Sam Worthington's performance in the lead role, but Elizabeth Banks really helped carry the film with her trust worthy character that lends on the side of good.

All in all, a typical watch that won't leave you disappointed.