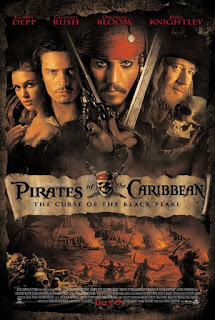 A blacksmith ends up teaming with Captain Jack Sparrow, an unusual pirate, to save the love of his life from Sparrow's former pirate allies.

After catching up with the Inceptor, the two boats turn towards one another and fire away in a battle mid-sea.

Jack Sparrow: [after Will draws his sword] Put it away, son. It's not worth you getting beat again.

Will Turner: You didn't beat me. You ignored the rules of engagement. In a fair fight, I'd kill you.
Jack Sparrow: That's not much incentive for me to fight fair, then, is it?

It has taken me well over nine years to finally come around to watching this series, but no time like the present to catch what has been heralded as one of the greatest series ever produced. Especially a series filmed in my family's home country of St. Vincent and the Grenadines.

Pirates of the Caribbean is everything that has already been said about it - the superb scenery and outfits, the wonderful writing, and the excellent talent that tied it all together is remarkable. Especially the character of Captain Jack Sparrow by  Johnny Depp.

The first film in the series was thrilling, and really set the tone for the others to come. If you haven't seen this film yet, like I had not,  it's not too late. It is very much worth the watch.