For No One To Care - Isn't That We Want For Gay Athletes Like Michael Sam? 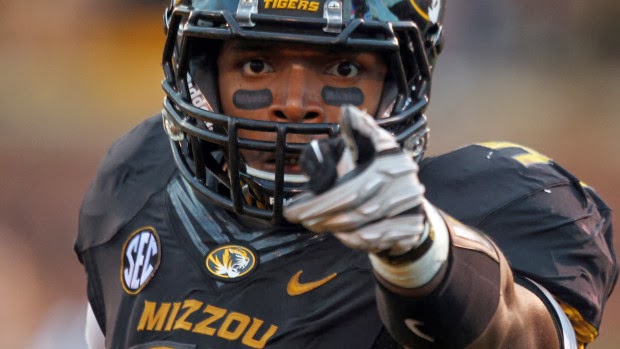 With the recent announcement from Michael Sam of the University of Missouri, the sociological topics of whether professional sports are prepared for gay athletes is at the surface of discussion and thought. It's a valid question as our society continues to integrate and accept homosexuals in the many facets in which we operate.

Sam, a potential future NFL'er, announced to his teammates prior to this collegiate football season that he was gay. To the respect of his teammates, it never became an issue as 1. not one of them decided to leak it, and 2. it never truly mattered to them. As always in sports, the bottom line is, can you play? And Sam, a projected 3rd, 4th, or 5th rounder, can. Performance will always remain the driving force of sports.


The big deal however comes with whether GMs are up for the conflict that may come with Sam disrupting any locker room unity and the media circus attention it will bring. Sam hasn't even played a down in the league and he is already one of the NFL's most household names because of this development.

Other sports and leagues such as the MLB and NBA are now also confronted with this issue.

I never once bought into the announcement by Jason Collins. Nothing against him, I just felt it really didn't do much for anyone. Him claiming his hand at being a homosexual athlete didn't really move the needle as he was at the end of his career, and the fact that he was someone who barely could keep a spot in the NBA. Not looking to be rude, but it is what it is - performance driven. In Shaw's case, it's highly relevant. His professional career is ahead of him.

In my opinion, this entire situation once again just seems more grandeur that it should be. More excess, complicated, fluff from our media who continues to overextend the "struggle" of the homosexual movement.

Just my honest, non-pc, opinion. Just bloggin' truth. I think we are at the point as a nation where the outcry against gays is far and away much less than it used to be, and ultimately, it is now considered ill-mannered in our society if you did so. No one will actively seek out against gays being included in our society.

Now you may say, "those people won't say it publicly, but there are still plenty who are uncomfortable with it and will keep it private". My retort would be that our society does that with every and anything that separates us as people. Racism. Religion. Politics. Income. Just to name a few.

I still find the idea of "acceptance" in professional sports more about the leniency and lack of accountability in the culture in professional sports than it is regarding "how a gay player fits in". A culture we have condoned for years, especially in the highly pardoned NFL in various sociological aspects, cannot currently accept gays into a locker room without change. In my opinion that is the true root of conflict here.

But honestly, seriously, with me laying all of my chips out on the table - is this really a big deal? Like, really, a big deal?

I'm glad Sam is able to truly be himself, and that's all I could ever ask for someone who is indeed leading a life that may have detractors who don't approve. However, I'm still skeptical of the purpose of coming out or announcing this publicly.

After all, (again, pc-wall removed), I don't care anymore. I'm just tired about hearing who is "coming out". I actually don't care who is gay, straight, or whatever your sexual orientation is. Isn't the idea to one day get to a point where it doesn't matter, to get to a point where we judge others by the content of their character? Yet, we continually as a society attempt to do just the opposite.

After all, didn't we reach our goal of what we truly want for society when Sam came out to his teammates and it didn't matter a bit in their season, in their athletic culture, or even within the brotherhood of their team? Isn't that what we truly are looking to accomplish moving forward? Isn't this the real aspect that should be celebrated in this story?

A gay man on a football team, no one cared, and no one even batted an eye to cause a discussion.

Because in the end, it didn't matter. He was just another different individual among many who battled in the trenches with his teammates. And that's what we want for our future as a society. And again, that is the bottom line in the performance-driven world of sports.

Hats off to the University of Missouri's football team who showed us what we as a society are striving towards.

I hate to say it, but this seems a bit backwards in my eyes, no?