I Hate Having Feelings For The Knicks 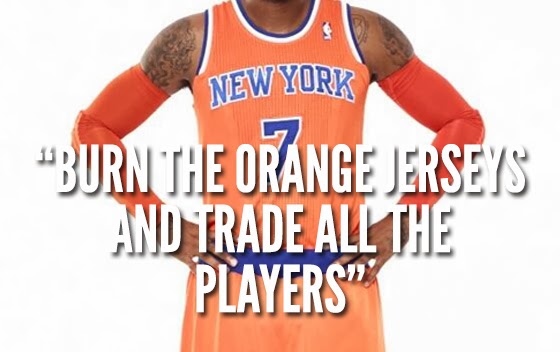 I'm not even sure what to say anymore. I've held off until late February to finally sound off on what has been an absolutely atrocious New York Knicks season. Abysmal. Pathetic. Sorry. Despicable. Ridiculous. All adjectives that also come to mind in the event you don't find "atrocious" accurate enough.

It's all too hard to understand my relationship with my beloved New York Knicks. I love them just about as much as I hate them. Really, that wraps it up in a nut shell. It's a fandom only a few select other fanbases (Mets and Browns?) can understand.

My relationship with the New York knicks is the deepest form of love and hate at the same time there possibly can be. #knicks
— Dome Pondering (@DomePondering) February 23, 2014

After a 54-win season last year that looked like we were finally (finally!!!) headed in the right direction, this franchise stepped on the brakes, tossed everything that was good, took a left turn, and drove the car right into the river. The East River that is.

In an odd way, this season feels similar to those under the Isiah Thomas rule of madness - pretty much waiting until baseball season arrives to watch something of significance. So instead of trying to ration this feeling out, I'm just going to let it all flow with no rhyme or reason. Here is everything I absolutely hate about this 2013-2014 New York Knicks Season:

I HATE the Bargnani trade.

I HATE we did so little to sure up pieces on our bench.

I HATE that we resigned J.R. Smith to a long term deal.

I HATE the fact we did so knowing he just came off of knee surgery.

I HATE that Glen Grunwald was let go after putting together a 54-win season. (Only the Knicks do things like this...)

I HATE that we hire Steve Mills, a man who once thought Isiah Thomas would be great as President of Basketball Operations for the New York Knicks (Again...only the Knicks would do this).

I HATE knowing Donnie Walsh never had a chance to see his plan completely through.

I HATE having that feeling that Walsh's plan would've been spectacular.

I HATE how we sign Beno Udrih and Metta World Peace to not play them, and eventually buy them both out mid-way through the season...JUST to have them comeback and torch us for career games...because you know that's EXACTLY what will happen!

I HATE those stupid orange jerseys.

I HATE how bad the decision to not keep Jeremy Lin looks now.

I HATE having to watch Raymond Felton run point guard for this team.

I HATE our offense.

I HATE the way we stand around and look at Melo in isolation.

I HATE how uncreative and unpredictable our offense is.

I HATE how elementary our offense is out of timeouts, huddles, meetings, halftimes, and during crunch time situations.

Did I mention how much I HATE our offense? Worst offense in the league.

I HATE our defense even more than our offense.

I HATE how bad we are at defending the pick and roll.

I HATE how bad we are on defense.

I HATE that we can't even rebound.

I HATE that Carmelo Anthony leads our teams in rebounds.

I HATE that Carmelo literally has to do everything for this team.

I HATE the fact that Amar'e Stoudemire is the mos expensive reserve in the NBA.

I HATE Tyson Chandler not being able to score.

I HATE our management.

I HATE their fixation with celebrities at games and not with winning games.

I HATE what Jim Dolan has done to this franchise since taking it over from his father.

I HATE how we've not heard ONE word from GM Steve Mills during this debacle of a season.

I HATE how we sign Chris Smith for no apparent reason.

I HATE how we allow CAA to have influence in basketball decisions.

I HATE that we have no draft picks in a year where losing actually might not be the worst thing. But for us, of course, it is.

I HATE how the Knicks front office tries to insult Knicks fans.

I HATE that the Nets are actually decent.

I HATE hearing about future plans once again.

I HATE not having any faith in management to do anything significant with the caps space in 2015.

I HATE that the Knicks are again the laughing stock of the league.

I HATE watching guards beat Raymond Felton like a rug...umm...did I say that already?

I HATE watching games and knowing the Knicks have zero chance of winning.

I HATE the fact that I am more invested in St. Johns and Syracuse than I am Knicks basketball.

I HATE that Toure Murry plays well, defends decently, but is handcuffed to the bench for Raymond Felton's play.

I HATE having another superstar during my lifetime and again surrounding him with nothing of significance.

I HATE the idea of possibly losing Melo.

I HATE how we drop homegrown guys like David Lee for the big names in lights and scrolling marquees that are just overpriced toys.

I HATE how we screw up drafts and draft picks.

I HATE having feeling for the Knicks.