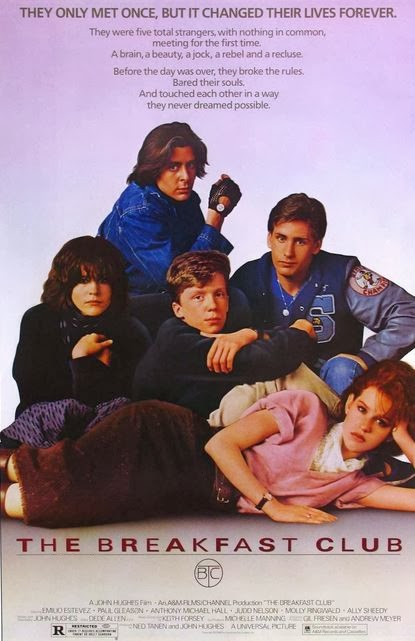 Five high school students, with five clearly distinct stereotypes, are forced to spend Saturday detention with one another where they eventually learn about one another and the issues they each face aren't as clear as perceived on the surface.

After a long day, the group sits down and gets real on their future after what they learned. Especially, when Brian shares his story on how he ended up in detention, and the stirring question of whether they would be friends on Monday.

Brian Johnson: Dear Mr. Vernon, we accept the fact that we had to sacrifice a whole Saturday in detention for whatever it was we did wrong. What we did *was* wrong. But we think you're crazy to make an essay telling you who we think we are. You see us as you want to see us... In the simplest terms, in the most convenient definitions. But what we found out is that each one of us is a brain...
Andrew Clark: ...and an athlete...
Allison Reynolds: ...and a basket case...
Claire Standish: ...a princess...
John Bender: ...and a criminal...
Brian Johnson: Does that answer your question?... Sincerely yours, the Breakfast Club.

Well, what can I say? It took me too long to finally watch one of the popular John Hughes-directed, 80's movies. For years I've seen the classic scene of Judd Nelson's fist pump as he walked across the football field and never truly understood it's meaning. Not anymore.

The Breakfast Club is a great film. Possibly a tad bit overrated, but for the most part, it is enjoyable, and really sparks thought on the way we perceive others, more specifically, the way we categorize others for our convenience and understanding.

The communication and interaction between the five characters are what make this movie. They each are guarded until they begin to understand one another. Their misconceptions pretty much guide them until they each take the risk of facing the truth among them all.

The film is the ultimate movie for adolescence individuals, but is still relevant for adults who also still fall victim to such archaic and ignorant sociological standards.

All in all, it's clear why this film is a cult classic.