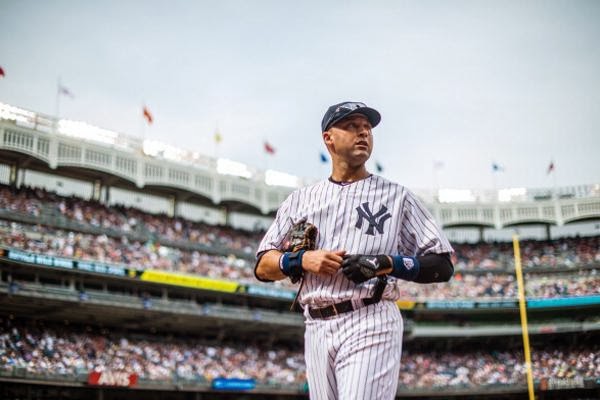 After what has been a brutal month at work for me, as is the case with many who work in college athletics, I really haven't had the time to sit down and punch the keys on the impending retirement of Derek Jeter.

I stepped out of the Subway last Wednesday on my way to work to walk past a bar, like many others across the world, that usually has sports programming on it. As I walked past the glass windows I noticed all of the screens on the MLB Network with the red ticker on the bottom scrolling "Breaking News" and many people staring up at them. I couldn't make out the text, but I knew the highlight package above the red ticker had a Yankee involved as I managed to recognize the uniform.

I quickly pulled out my phone to have it instantly update after being under ground to read:

"Derek Jeter announces he will retire following the 2014 season."

That's all I could muster as I stared at my phone in disbelief on the corner of Bleeker and Broadway. If words could do damage it was those words that seemingly kicked me in the gut.

For quite sometime. I had a feeling 2014 would be Jeter's last. However, I somehow believed he would be the type that would play his final season and then seemingly announce his retirement afterwards. Nonetheless, I'm glad he let us in on his plans, something Jeter hasn't necessarily done throughout his career. Really, it's what made him Derek Jeter. Playing things close to the vest. Being cool. Carrying himself like the ultimate professional. Making clear the line between his professional and personal life, and never blurring the two worlds.

While Mariano Rivera has always been my favorite baseball player (and overall athlete), ironically, Derek Jeter would probably fit right behind Mo in both categories. #2 is my number two. And despite my love for Mo, I undoubtedly am aware that Jeter was the face of the New York Yankees and all of baseball.

With all of those names I grew to love such as O'Neill, Williams, Pettitte, Mussina, Posada, and now Rivera slowly wearing suits and commandeering announce booths into retirement, Jeter's retirement marks the official - the official - end of an era. An era that I've completely enjoyed since I was nine years old. I now write this as at the age of twenty-eight.

Mike Greenberg of ESPN's Mike and Mike in the Morning radio show made a great point in regards to the emotions showed by many over Jeter walking away after 2014. He stated that while baseball may not exactly have the biggest stars in sports, their athletes have a special bond and connection with their fans like no other sport because for seven months of the year, each day, every night, we see that athlete at the ballpark, or we let them into our homes at night. And that's the case for Derek Jeter and Yankees fans.

For baseball fans my age and younger, Derek Jeter was our childhood because of that bond. Actually, he was most of my life. For 19 years, this being his 20th year - twenty years of my soon-to-be twenty-nine years on earth I've spent every summer with Derek Jeter. And it all ends this year.

As much as "Enter Sandman" by Metallica makes me sad (it really does, ask some of my interns who see me as we play the song after our Friday Night basketball double headers), and not seeing #42 out in the bullpen this year, it will be just as sad and even more weird to know that #2 won't be at shortstop ever again for the New York Yankees.

Jeter is one of kind, and his retirement will officially end an era for the New York Yankees, and close the book officially on my childhood.

Here is to one more year...hopefully, we can end it with Jeter hoisting the commissioner's trophy one more time.