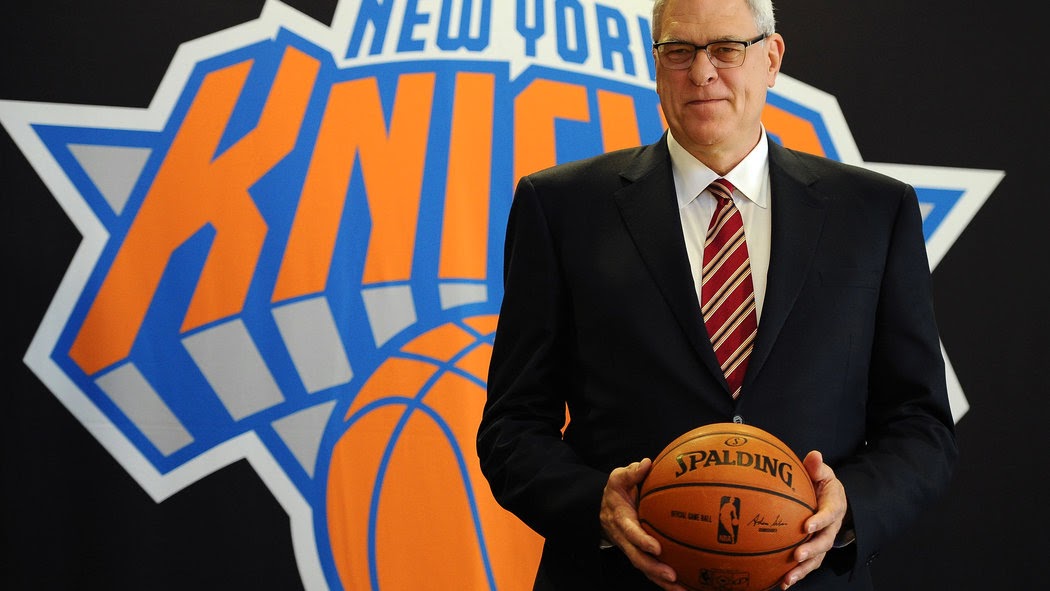 I always said I wouldn't believe it until I saw it. Yesterday, I saw it. Phil Jackson is now - officially - the President of Basketball Operations for my New York Knicks. It still seems surreal that the Knicks are now in the hands of a competent basketball mind. Seriously, Jackson might be the first person in well, as long as I could remember, where Knicks fans, including myself, aren't worried about the future. We aren't concerned about the surety which has become part of Knicks fandom - waiting for the other shoe to drop...or another 1st Round Pick to be traded.

However, to be honest, I'm not ready to prepare ticker tape to throw at the Canyon of Heroes just yet. I've seen too much, endured for long enough, and have been hurt too many times by the Knicks to just jump all-in. This franchise has tried everything, and this is just another attempt to get to the promise land. Granted, it's the biggest and best power move made, yet, still another attempt.


Despite my cautionary feelings, I do believe Jackson will be good for this franchise. For starters, and most importantly of course, he removes Jim Dolan from the equation. More on him in a bit. Second, he will be a voice that will be able to bring stability, integrity, and a winning culture along with him. Again, this is a man who has more playoff wins and championships as a coach than the Knicks do as a franchise! And the two that we have, he was a part of anyway!

And if you're wondering my thoughts on whether Jackson came to New York for the money - no I don't believe he did. At age 69, with a legacy and career resume that reads the way Jackson's does, it's hard to believe money was the sole driving force here.

Again, I'm just surprised the Knicks didn't give up a 1st round draft pick to get this done. I'm sure Dolan offered not realizing how draft picks work...but I'll digress on the tired Knicks complaints/jokes.

And one needs to think that way, especially in a year where hating the Knicks is/was too easy (I Hate Having Feelings For The Knicks). I'm really excited about the prospects moving forward. I can't wait to see the type of players brought in, the culture that will be created, and of course, if Melo can be retained. After all, Melo in the triangle offense would be tremendous!

Either way, Phil is good for the Knicks. I'm hoping this works out.
---

And is Phil Jackson as a Knicks executive wasn't weird enough, anyone else catch Jim Dolan's first public interview in seven years?

Dolan joined the Michael Kay Show on 89.7FM here in New York City, and spent half-an-hour with the crew fielding questions on a variety of topics.

Kudos to Dolan on doing this. Not only did he allow no punches to be held in the interview, he answered them all honestly and truthfully. And yes, I'm talking about Jim Dolan. Yes, two-time Idiot of the Year Pondy Award winning, Jim Dolan!

Dolan really came off as a guy that truly cares about the team, and for a second, I actually let my guard down in thinking about him being "evil boss" Jim Dolan, and allowed myself to view him as a guy who I felt is somewhat misunderstood.

I wish he did more interviews. And yes, the Garden Media policy is (still) VERY ridiculous.

But his comments about being just as frustrated with the team this year, looking to win a championship, and concerned about families and the common man not being able to attend games was an eye opener, and a bit refreshing.

Don't get me wrong, I'm not ready to let Dolan completely off the hook for the past ten years...twenty years...well, heck, the past forty-one years, but it was nice hearing his views and debunking a few of the imaginary creations we all had of Jimmy D.

And yes, how can I forget the biggest quotes and confirmations of the day!

Phil makes it clear: he wasn't coming to NY without assurance of autonomy from Dolan. Had that discussion in January.
— Howard Beck (@HowardBeck) March 18, 2014

Dolan, for his part, says he "willingly and gratefully" is ceding control to Jackson.
— Howard Beck (@HowardBeck) March 18, 2014

Jim Dolan has relinquished all - ALL! - (hallelujah!) decision-making power, and then made the media rounds to confirm it, as well as discussing other Knicks issues!

Whoa! Wow. Tuesday was bit of a shock for Knicks fans. I'm actually going to need a few days to digest this.

Of course, fate would dictate that I have tickets for Knicks/Pacers, and will be in Madison Square Garden tonight.