Grace and Dying Everyday: No Longer Just a Fan of Jesus

March 06, 2014
As the 2014 year began, I purchased two books I've been longing to dive into - "Why Jesus > Religion" by Jefferson Bethke and "Not a Fan" by Kyle Idleman. Both books have been on my radar for sometime, and both come with very popular reviews as Bethke followed up on his insanely popular viral video on YouTube (now over 26 Million views!), and Idleman's penned work stayed on the best-seller's list for much of the last two years.

Honestly, as that is what I tend to bring here to the DP, the books were also purchased at a perfect time for me. For whatever reason, I began to hit a wall in my faith. Not a destructive wall in looking to run away or make some life-altering announcement, but in a way that kept a few things pressing on my heart.


I love Jesus. That will never change. That faith in him and what he has done for me and my life is something I don't believe is something I could ever walk away from. Ever.

However, whether it be the media, reputation, or just the poor representation of Christianity among Christian themselves, sometimes it makes your walk with Christ that much harder. From the overly aggressive campaign against homosexuality to the growing shaking-of-the-head feel I get in the ineffectiveness and ill-operation of churches, it felt like the community itself increases the already heavy cross we bear as believers in a growing un-believing world.

With such disconnect and discomfort with the Christian community as whole, one tends to clam up. You kind of figure that you'll be able to "do the Jesus" thing on your own. After all, it is MY relationship with him, right?

It's a very dangerous way to live as it is such a fine line to walk. One you could walk for only so long before eventually the entire thing leads to an attitude and soul altering mission of looking to do it all on your own. A task that is doomed before it begins. It all just leads to becoming hardened to God's grace, his mercies, and thus relying on works or even yourself. Again, a dead end road.

See because religion says do, Jesus says done
Religion says slave, Jesus says son
Religion puts you in bondage, while Jesus sets you free
Religion makes you blind, but Jesus makes you see
And that's why religion and Jesus are two different clans
Religion is man searching for God, Christianity is God searching for man
Which is why salvation is freely mine, and forgiveness is my own
Not based on my merits but Jesus's obedience alone

Jefferson Bethke's book, "Why Jesus > Religion" is a quick and easy read I would recommend to anyone. From those new in their walk with Christ to those who need to be reminded, like I did, that sometimes it's not about me, or being comfortable, or having to have things my way, but it was about Jesus' grace. Sometime's we lose sight of that. I know I did. There are times where you find yourself looking to do so many things, so many works, accomplish things before Christ in a way of saying, "look, I'm doing the right things, aren't I good?".

We forget, all have sinned and have fallen short of the Glory of God (Romans 3:32). We imprison ourselves in always looking to do the right thing, and lose sight of why we do it. I do this ALL the time. The most important thing is to be free, and of course, to enjoy God's grace. It's such a beautiful thing. Too many times  we allow guilt, fear, arrogance, and pride get in the way of it.

Plus, Bethke's book is brutally honest about his past, and as a young twenty-something, he has an outlook that is VERY relative, authentic, and most of all, genuine.

And of course, there is the other book, "Not a Fan" by Kyle Idleman, which is one of the best books I've ever read - of any genre. Idleman's message that many become fans of their faith, enjoying it, tailoring it for their lives, and supporting it for their comfort, is super powerful. It was a book that will definitely cause you to have many personal convictions, but at the same time, also personally free  and guide you in certain areas of your life and in your faith. 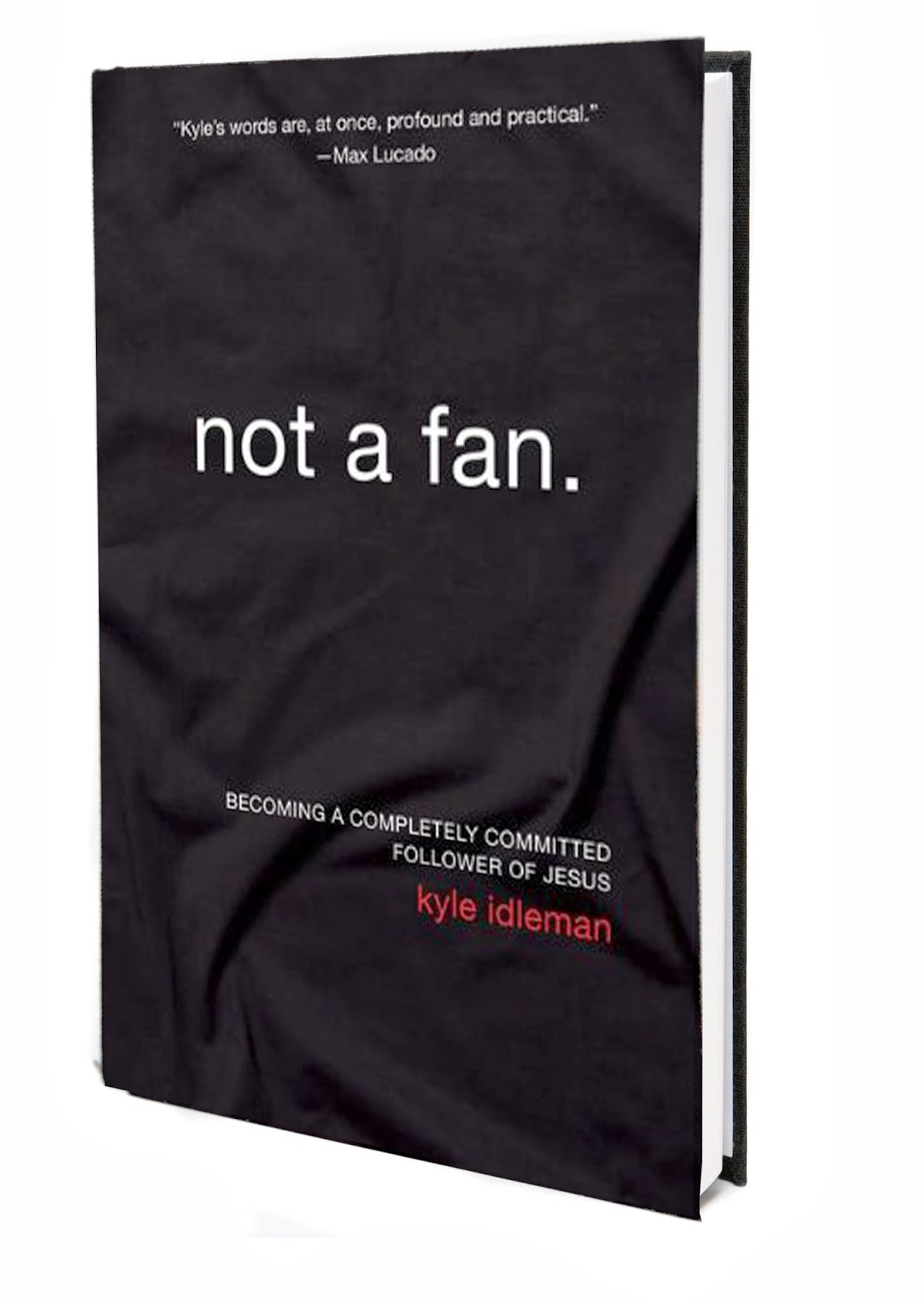 I personally had to take my time going through it, allowing myself a day or two in between chapters to either digest his message, or even apply and work through personal convictions. It is that good. Again, be warned, you will be called out!

Idleman's message is that there is a significant and defining difference between being a fan and a follower of Jesus. After finishing the read, I don't want to be just another person that rummages through a Sunday routine of church, or who may read the good book once in a while to pull something out of it to comfort myself through what I am going through, or even be the person who uses their faith as some sort of banner, to fill the "religion-selection" in their lives through necklaces and tattoos of crosses and scripture, and/or as meaningless admission as some sort of reputation moniker.

I would hate the idea of leading a hallow faith-driven life. Just being a fan of Jesus? That sentence alone scares me. I want more. He deserves more. How could I not give him more than just being a fan?

In finishing these two books, I've learned something absolutely tremendous in my now 16-plus years of walking with Christ. Whether in the best of times, or those times (and there are plenty!) that come up where I seem to put him on the back-burner, there is a certain sense of freedom and understanding of the power of grace you get from both books.

However, most of all, the biggest thing I've taken away is the importance of Luke 9:23 and learning to be free in the essence of denying myself, everyday. Every. Single. Day.

"Then he said to them all: “Whoever wants to be my disciple must deny themselves and take up their cross daily and follow me."
-Luke 9:23

I don't want to be a fan of Him. I want to be a follower of Jesus. And in doing so, you have to really understand it's not about you. In fact, I love the life slogan of "Die Everyday".

I could not recommend these two books anymore than I already have. Nor am I doing them their due justice. Download them. Purchase them. Borrow them. Whatever. Get them, and read them. I'm sure both  books will help you see things differently in your faith, if not, change your walk with Christ forever.