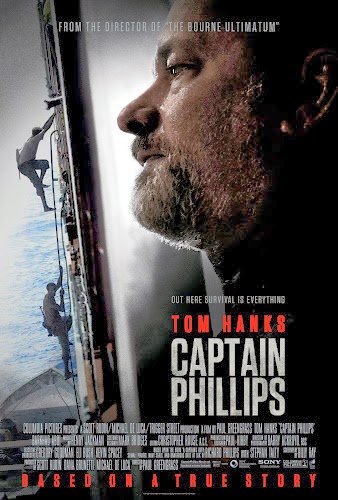 The true story of Captain Richard Phillips who was the captain of the first hijacked American Cargo ship in two hundred years.

After claiming to need to use the bathroom, Captain Phillips shoves one of the hostages overboard and dives into the waters in an attempt to get the Navy's attention to be rescued.

Captain Richard Phillips: There's got to be something other than being a fisherman or kidnapping people.

It would be really hard pressed to find someone - anyone - who dislikes Captain Phillips as a film. From the very beginning to the time the credits begin to roll, this film is non-stop action with much thrill involved. There are many movies that get that same comment made about it, but this film deserves it. For two hours, you will be glued to the screen with anticipation of the very next scene.

Of course, with any good film, there is tremendous acting, and Tom Hanks delivers in this one. In the lead role playing Captain Phillips, Hanks takes the character throughout the film from a stern-hard-to-read Captain to a person you knew genuinely cared for his staff, his family, and even the hostages.

There is nothing much to add or say about this film that Awards season hasn't already. The reputation of Captain Phillips is dead on. Tremendous film.

Please see this film. You won't be disappointed.