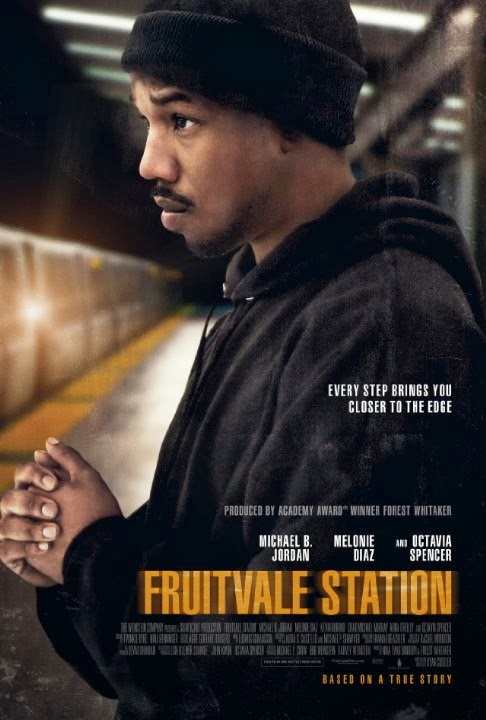 The true story about Oscar Grant, a 22-year-old bay area resident who was wrongfully killed in 2009, and the events that occurred on his final day alive.

Obviously, after enjoying the festivities of New Year's eve/day, a fun time on the train with strangers lead to a confrontation with an old rival from a juvenile correctional facility.

Tatiana: Nooo! Don't go. I'm scared.
Oscar Grant: Scared of what?
Tatiana: I hear guns outside.
Oscar Grant: You know what, baby? Those are just firecrakers. You'll be safe inside, with your cousin.
Tatiana: But what about you Daddy?
Oscar Grant: Me? Baby, I'll be fine.

Besides being a true story of a situation that sparked riots and national debate in our society, this film was really well done. Its ability to connect with the viewer on an emotional level is absolutely tremendous, and that is attributed to the spectacular performances by all involved, especially Michael B. Jordan, who is great. Of course, Octavia Spencer, who is always amazing, was on par, and Melonie Diaz solidified everything in her supporting role.

The connection of the viewer to Oscar is another big plus. He is such a dynamic and deep character. As a viewer you understood his desire to change, but could also feel for him on his struggle with his past, and the obstacles he was up against to make things right in his life.

Fruitvale Station's best quality is it's realism. Everything felt authentic. From the dialogue, the emotion, and the struggle of the characters, it all felt like the kind of real, raw, emotion you often don't capture on camera. At times, Fruitvale Station feels like a camera is following Oscar.

And how can we forget the thought-provoking message that there are thousands of Oscar Grants out there dying unjustly, every single day?

All in all, this movie is fantastic. Absolutely fantastic. Go out of your way to see this film.