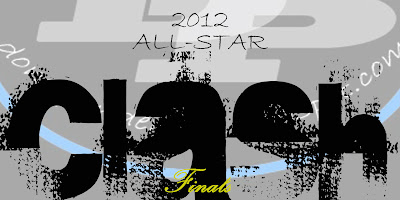 Here we go! After thirty-two participants and several rounds of just sheer weirdness, foolery and a little bit of logical explanation, we are now down to the final two in the DP All-Star Clash. The following Clash will determine the 2012 DP All-Star Clash winner and really nothing else - at all. But hey, it's all for fun!

The following and final clash will be another best-of-seven similar to the last three rounds with more random criteria to determine the winner. The Finals criteria are 1. Best Candidate For President; 2. Most Likely to Stay Out of Tabloids; 3. Ability to Be The Other; 4. Most Intelligent; 5. Most Likely To Win Olympic Medal; 6. Better Reality TV Show; 7. Most Likely to Be Next Food Network Star. So let's wrap up this thing...


Just in case you would like to see the path both took to the finals, the below is the updated bracket. Also, see here for previous rounds of the 2012 DP All-Star Clash.

Best Candidate for President - Batman, the rogue and vigilante that he is, has never been one to get involved in politics. In fact, he's actually taken down a few politicians in his day. However, while Manning has never touched the political realm, he does indeed have the qualities that everyone would want in a president. He's charming, respectful, well dressed, very PC, and always keeps his hands clean, at least from what we know. And heck, he's a quarterback! Being a team player and a leader of men are necessary to be President. (Manning 1-0)

Most Likely to Stay Away From Tabloids - As stated above, Manning never is involved in controversy. As for Batman, even though he says very little and keeps to himself, his existence is so unique, mysterious, and somewhat mythical, he'll always be material for Tabloids. Where is batman? Batman seen with this person! Bat signal issued, but no Batman - where was he? You know the deal. (Manning 2-0)

Ability to be the Other - As great as Peyton Manning is, it is hard to imagine him parading around town as a super hero saving those in trouble in Indianapolis - or now Denver. Batman on the other hand, would probably make an excellent quarterback with his unbelievable ability to escape as. Imagine trying to wrap him up in the pocket? He'd probably drop a dust bomb and then vanish. (Manning 2-1)

Most Intelligent - This is a tough one as both are extremely sharp individuals. Batman in knowing the ins and outs of Gotham, and Manning who memorizes over 150 plays for his teams, and knows the defenses and the players for every team in the league. While Manning, who has a variable of not having gadgets or tools to assist him against his enemy (opposing defenses), Batman has knowledge of cities, technology, officials, layouts, and must be one step ahead of his enemies. (Tied 2-2)

Most Likely to Win Olympic Medal - Since football is not an Olympic Sport, obviously the nod goes to Batman. He'd possible give it a go in several events. Track? Swimming? Javelin throw? Martial Arts? Boxing? Gymnastics? (Batman 3-2)

Better Reality Show - Football already has a somewhat reality show called Hard Knocks on HBO. While it is a fascinating show, and one simply dedicated to Manning and his everyday preparations, including game day, would be great as well, it pales in comparison to Batman. A reality show with Batman would be insane. I simply picture the show Cops, except your riding around in the Bat mobile with the caped crusader himself heading towards a crime or an injustice somewhere. Yup, that's way more action-packed and much more interesting. (Batman 4-2)

Better Chances of Being Next Food Network Star - We'll never know, will we?