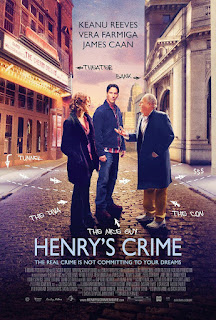 After being convicted for a bank robbery he did not do and losing everything after playing it safe, Henry decides to rob the same bank he was already convicted of and take some risks in life.

After realizing that digging a tunnel from the theater to the bank would require more man power, Henry and Max recruit Joe, a screw-up and current husband of Henry's ex-wife, for the job.

Julie: Aren't you guys worried about getting caught?
Max: It's kind of a win-win situation for me.
Julie: Why?
Max: I like jail.
---
Joe: You know how expensive diapers are? You know how expensive college is?
Max: You plan to send your baby to college?
Joe: Of course not! I just want to get him things he needs - things he deserves.
---
Henry: Stop the car. Joe, stop the Car!
Joe: We can't stop the Car, Henry, it's a Get-away-car.

Henry's Crime is your typical movie that looks average from the trailer and never quite got a buzz, but is a very good film. It's not a huge blockbuster or one that is a must-see, but it should be on your shortlist check out sometime.

Despite Keanu Reeves headlining the film, which he did an OK job in, the film is carried by the awesome job of Vera Farmiga and James Caan. Both made the film very interesting, and of course, the always funny Danny Hoch playing the lovable screw up as well.

While the trailer and/or DVD case leads you to believe that the film is playing on the law of double jeopardy, the real moral of the story touches on taking risks in life and attempting to break the cycle of playing it safe.

With a moral to grab on to, good acting, lots of humor and sharp-quipped lines, and a jamming soundtrack, Henry's Crime is a solid movie.