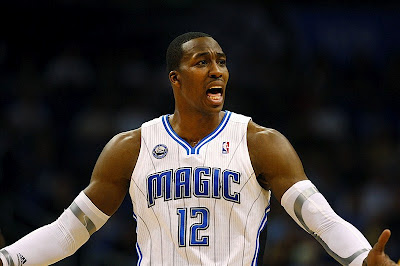 So here we go again. Another summer, another NBA superstar looking to "entitle" his way to the team and situation that he wants.

In most cases, you really can't fault Dwight Howard for wanting his ideal playing situation. After all, don't we all? Who wouldn't want to pick the circumstances of their employment? However, with the recent flip flopping that Dwight has done since last summer, he has essentially re-written the book for worst possible scenario to leave a team.

Yes, LeBron, your year has gotten that much better - you my friend, are off the hook.

While Dwight Howard hasn't amassed the type of hatred and is not vilified (yet) as the NBA's public enemy number one, Howard has ruined an image that was very likable. Howard burst into mega super-stardom after his entertaining showing at the 2008 Slam Dunk contest. He won us all over with his big goofy smile, his playful antics, and the showmanship of wearing a Superman costume and cape for his dunk.

We all ate it up. He quickly backed his soaring off-the-court commercialism and image with several Defensive Player of the Year awards, an NBA Finals appearance, and an improved offensive game. Howard  would eventually become the best big man in the game.

However, just like James and "The Decision", Howard's choices - or lack thereof - has turned that equity of positiveness and fan favoritism into a reputation of being just another spoiled, cry-baby, superstar looking to force his way into a situation.

Howard initially said he was staying in Orlando.

Then he wanted a trade to New Jersey and the Brooklyn Bound Nets.

Then he decided to forego free agency and opted into the final year of his deal with Orlando.

Howard then decided he wanted a trade to the Nets - again.

And because he can't freely go now, he is claiming the Magic organization "blackmailed" him into signing deal, and that they failed to provide what they "promised" him.

Just recently he claimed he will not sign with any team that trades for him.

And as of this writing, the Nets just acquired Joe Johnson from the Hawks, thus eliminating almost all possibility for a trade to the Nets.

Of course, unless Billy King and the Nets can work a miracle sign-and-trade to pair another dynamic trio of Deron Williams, Johnson, and Howard.

And who knows, with Atlanta now having much cap space, Howard may now want to go home to join his good friend Josh Smith in the city he grew up in.

But who knows what Howard really wants?

Honestly, I don't think he even knows.

And to be honest, his constant flip-flopping, whining, self-perceived entitlement, and arrogant disregard for the lives of others (costing others their jobs and still leave?) has essentially made him the disgust of all NBA fans - including me.

Whatever happens in the next few days, for an athlete that loves to be liked, will wonder why that support is no longer there. He can look no further than this moment of wrong-doing that altered the course of his career - "The Indecision."